Art - Landscapes  Click here to go back to A-Z page 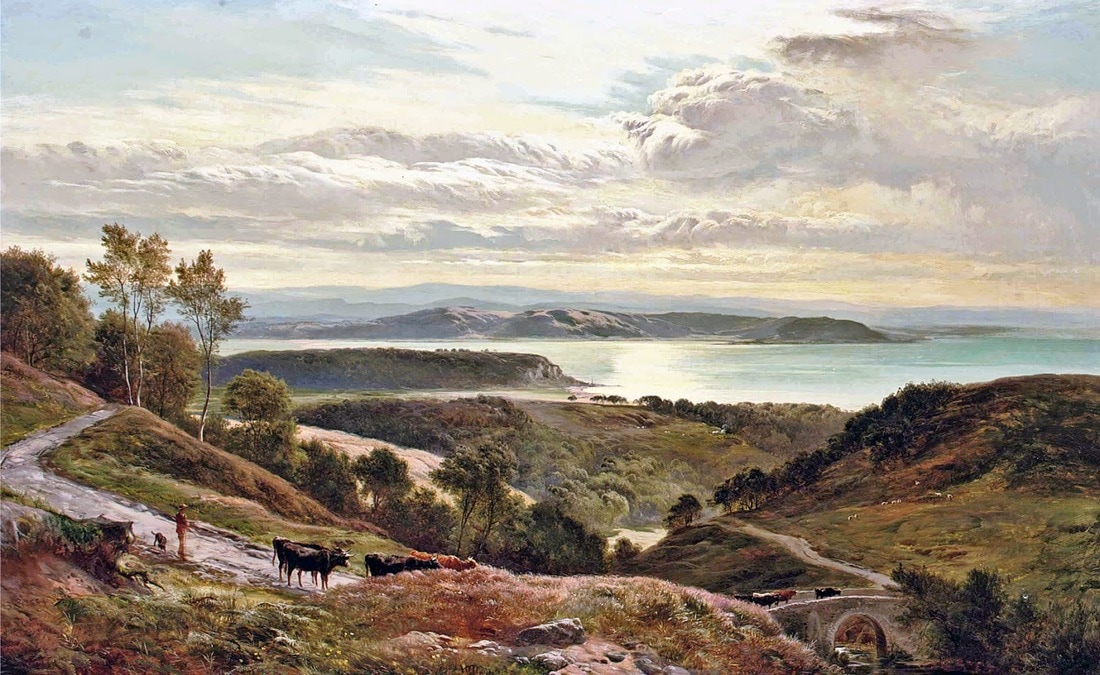 There is a bit of poetic licence here.  The promontory in the middle is Meathop Cliffs before the railway cut the end bit off (thanks to Sean Turnbull for identifying this), but I can't quite work out the angles to determine where this was actually painted from.  Possibly the Lindale end of the top road, possibly Brown Robin - or most likely a sort of conglomerate of views.  However, anyone familiar withe countryside round here will know that deep valleys like this don't really exist - and there certainly isn't a packhorse bridge like this in the immediate locality!

However, Percy was a 19th-century British landscape painter specialising in cattle amongst the mountains with cloudy skies - so he has simply carried this over into a stylised painting of the area.  Rendered in Naturalist style, his Victorian landscapes frequently included rural figures and animals in his compositions, his focus was on capturing the beauty and atmospheric presence of the empty countryside. He traveled extensively throughout the United Kingdom, drawing inspiration from locations in Wales, Yorkshire, and the Scottish Highlands, among others. Percy rose to significant popularity despite receiving no formal training. He exhibited at the Royal Academy, and his work was collected by distinguished socialites including Queen Victoria. 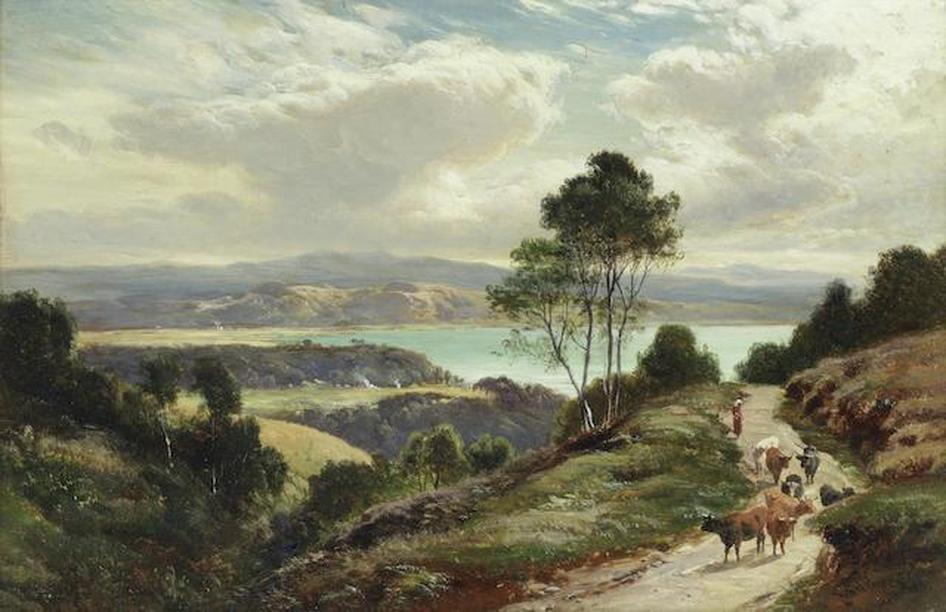 Nine years later, Percy painted this scene, and it's obviously meant to be from pretty much the same place.
To me this looks much more realistic.  Still can't quite locate the precise point though.... 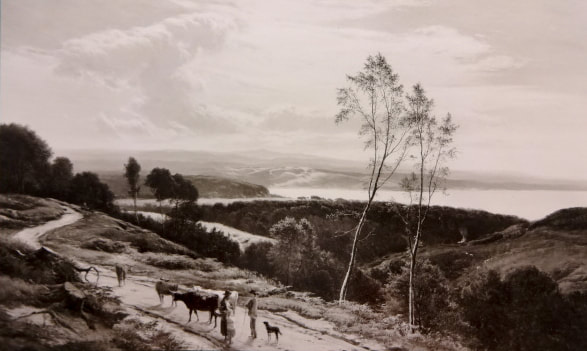 He obviously liked the place, this is again similar.

It is a photo of a painting, not the painting itself
​www.orleanshousegallery.org/collection/a-view-looking-over-grange-over-sands/ 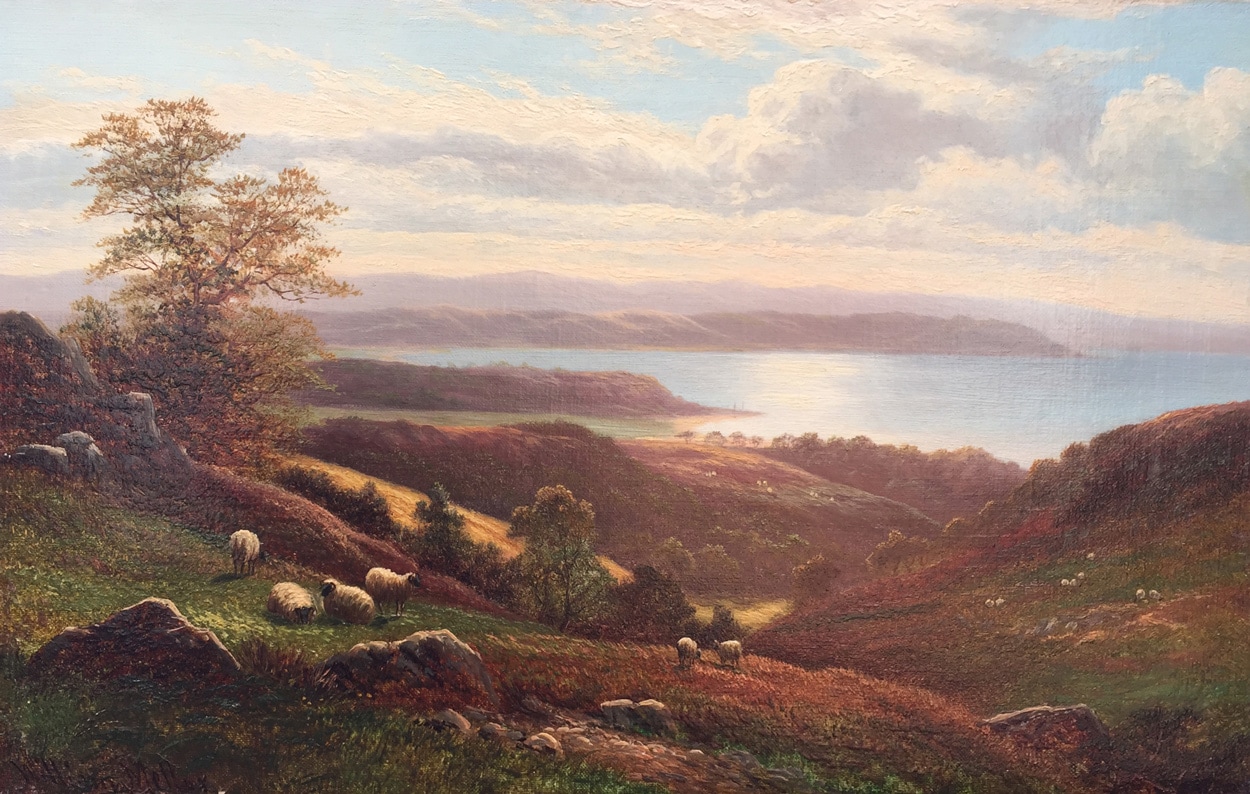 This is pretty much the same view as Percy's 1874 picture - just a slightly different angle to exclude the road / bridge and so on.  Possibly more accurate, I don't know - I shall have to find the location and take a photo!

William Mellor was born in Barnsley in 1851, the son of the landscape artist Joseph Mellor.  William Mellor was greatly influenced by his father’s work, especially in his earlier pictures, in which he tended to paint darker and more autumnal scenes.  William Mellor travelled widely and was inspired by the beautiful scenery of his native Yorkshire, North Wales and the Lake District, painting both the calm waters and the flowing waterfalls of the English countryside.  His paintings were beautifully executed, with trees in full foliage, lining the flowing rivers and casting shadows in the rippling water, lit by the rich English sunlight.  He painted tranquil scenes in summer or early autumn, with cattle watering, sheep grazing and the occasional kingfisher sitting on a rock in the river, a timeless record of the great British landscape. sutcliffegalleries.com/william-mellor-10/#!prettyPhoto 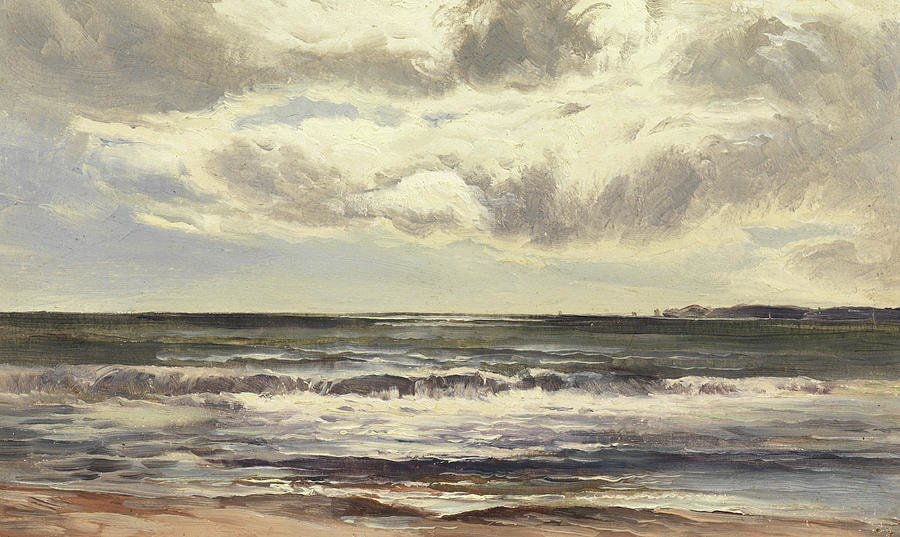 More Percy paintings from 1874 of the Bay (above), and the Sands (below) 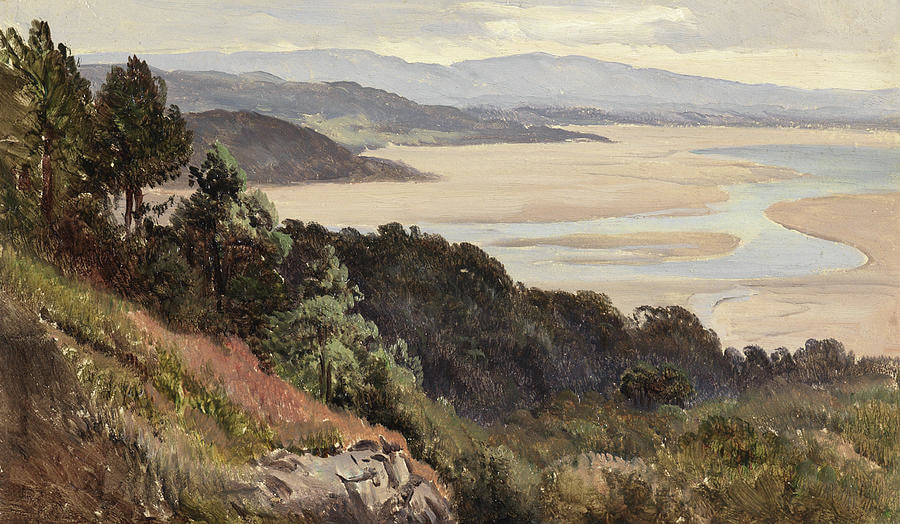 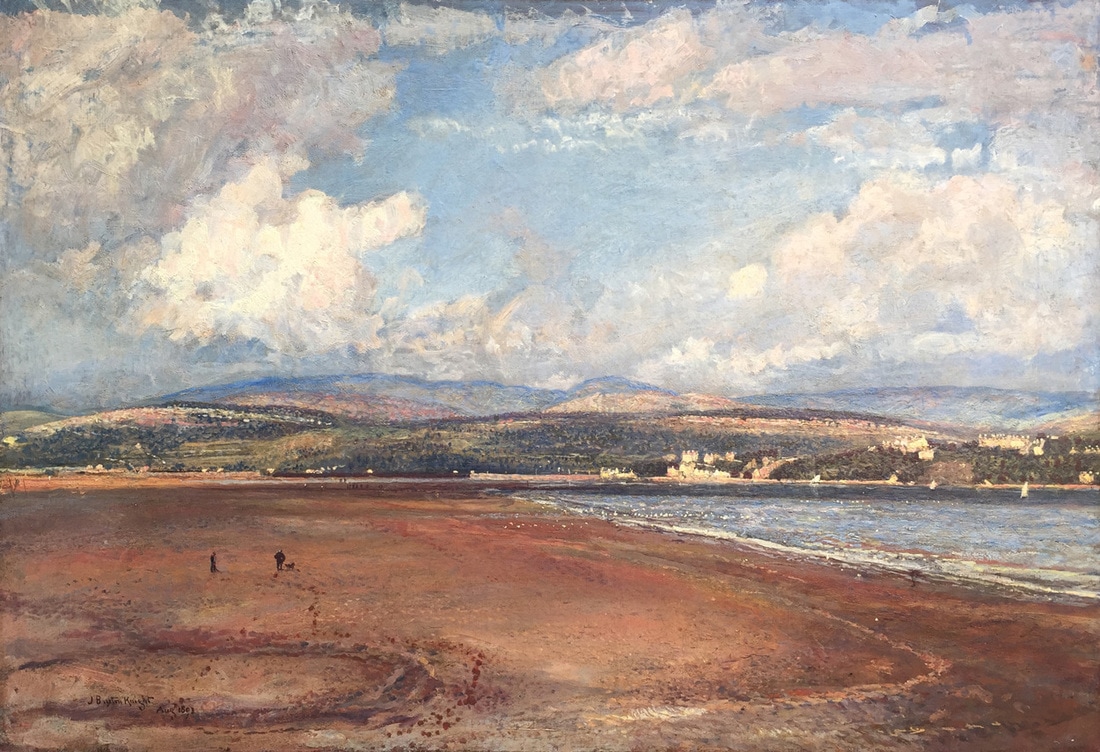 This painting was exhibited at the Royal Academy in 1894.
Buxton Knight was a fine painter of the English landscape, in both oils and watercolour.  He started his career as a schoolmaster, and painting was still only a hobby. However, he left this post and entered the Royal Academy School, devoting himself entirely to his true passion – painting. In 1861 he had his first painting accepted hung at the Royal Academy in London, which was followed by almost annual exhibits at the Academy until 1906. Buxton Knight was an advocate of painting ‘plein air’ and he was aware that landscapes produced in a studio gradually tend to possess an indoor appearance. To Buxton Knight, skies may fairly be described as the keynote of landscape painting and using bold fluid brushstrokes, and revelling in the exercise of free flowing line provided by oil paint, he produced some marvellously atmospheric works. It was during the period 1893 – 1897 that he travelled to the Lake District and painted a series of landscapes, of which eight were exhibited in the Royal Academy.
Buxton Knight enjoyed considerable success during his lifetime, exhibiting in London, and Paris, where he won a bronze medal in 1889. 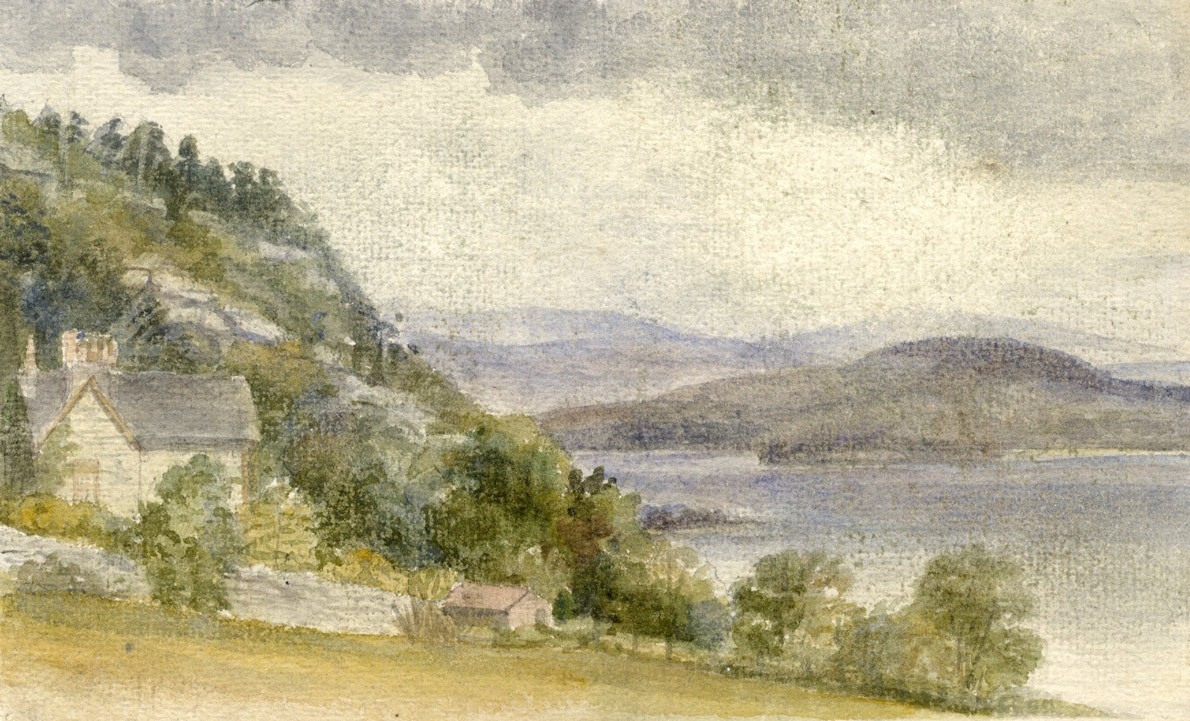