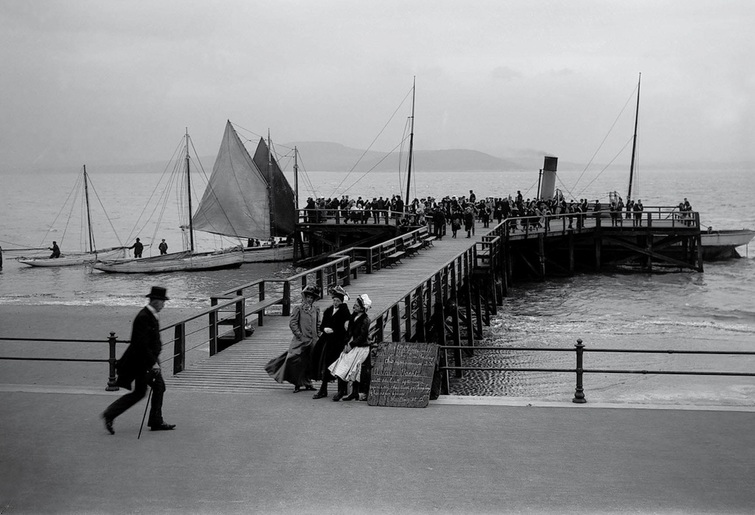 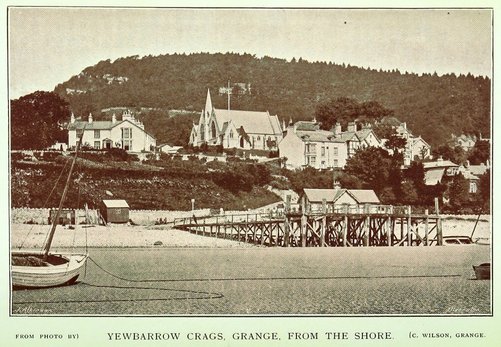 Bayley Lane Pier - from Atkinson's Guide 1897 (before the prom was built)
mid 19th century guide described Grange as “Peerless and Pierless”.  Two piers were built in the late nineteenth century – to some disquiet amongst residents.  Many believed that they would simply increase the flow of ‘cheap trippers’ from Morecambe.  It is reported that many visitors did come over, and found a lack of things to do!

In 1875, the Morecambe Steam Boat Company built our first pier at the bottom of Bayley Lane, which at that time allowed vehicular access across the railway onto the shore (Bayley Lane was described in the Ulverstone & Lancaster Railway Act of 1851 as a ‘certain highway', numbered 54A and made provision for a level crossing for the road.  This was stopped up to vehicles under the British Railways Act of 1968 – since when it has been a public footpath only, until 2017 when it was closed for safety reasons).  There was also a small jetty there at the time.

It fell largely into disuse when the Clare House Pier was built (see below).  It was proposed for restoration in 1900 by the ‘Grange Pier and Baths Company’, but I'm not sure whether this ever happened as it was demolished in the early twentieth century.

This photo shows a smaller jetty.  I am uncertain whether this was a small jetty which was replaced by the main pier, or whether this jetty was left after the main pier was dismantled.  It is certainly before 1904, as there is no promenade.​ 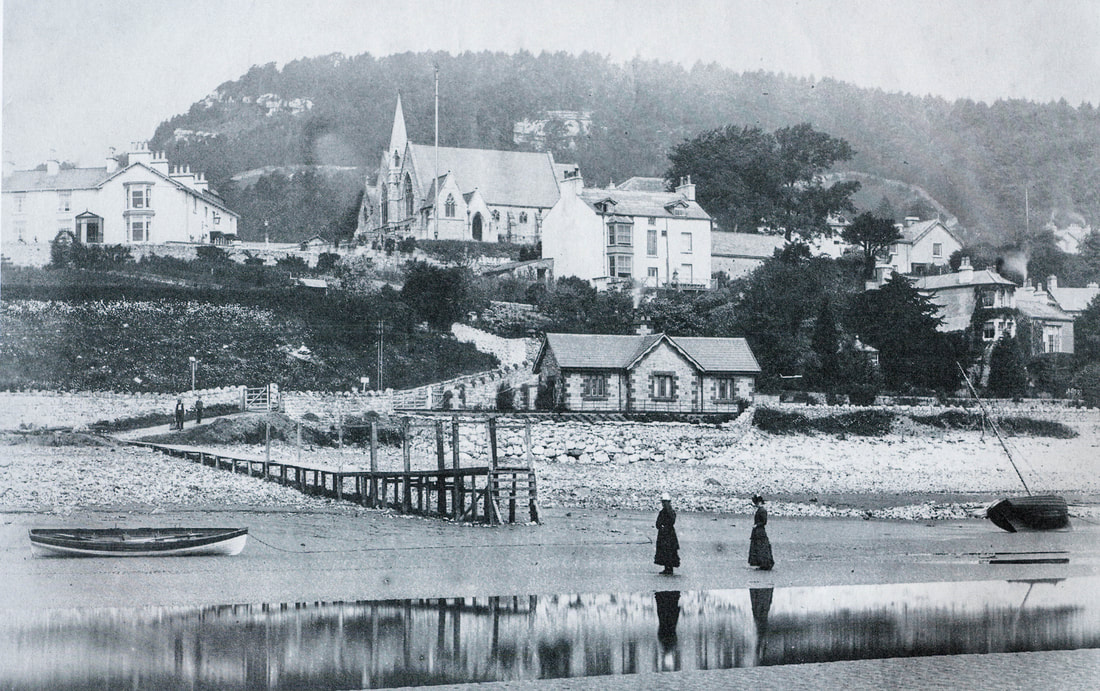 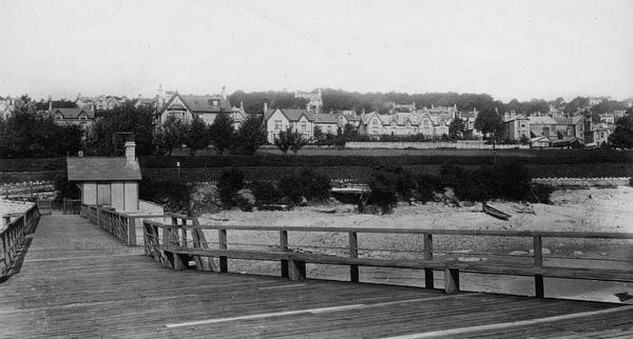 The way into town was over the bridge (steps at that time – the ramp was added in 1904 when the promenade was extended), and along the narrow Clare House Lane by Berners.  Local market gardeners sold their goods to the trippers.

It originally had a hut at the landward end of the pier – presumably for taking bookings for trips (and to welcome people to Grange).  There was also a thriving prawning business using the pier – it wasn’t just for trippers.  The hut was demolished sometime after the prom was built in 1904.


​The Pier survived until the 1930s, although smaller than its original size.  A huge amount of damage was done by storms in the 1920s, one on 28 October 1928 being particularly strong – and shattering the seaward end of the pier - which was replaced by a sort of floating jetty, with only the landward section remaining from the original pier.  Even this disappeared in the 1930s.  Until the sands built up over the last 20 years, you could still see the wooden stumps of both piers.

The piers were for cross bay Steamers (which also called at Arnside until 1900).  The Company had boats called ‘The Yorkshire Lass’, ‘The Morecambe Queen’, 'Britannia' and ‘Sunbeam’.  The latter was the last recorded steamer to call at Clare House Pier in 1910.  The cross-bay sailings ceased because of the gradual shifting of the channels leading to a lack of deep water.  There were still trips out in smaller boats and fishing vessels.

There are many images of the piers – especially on Francis Frith’s website, but also – just put ‘Pier Grange’ into Google Image search.  Below is just a small selection - mainly postcards.  Click on any to see the whole image. 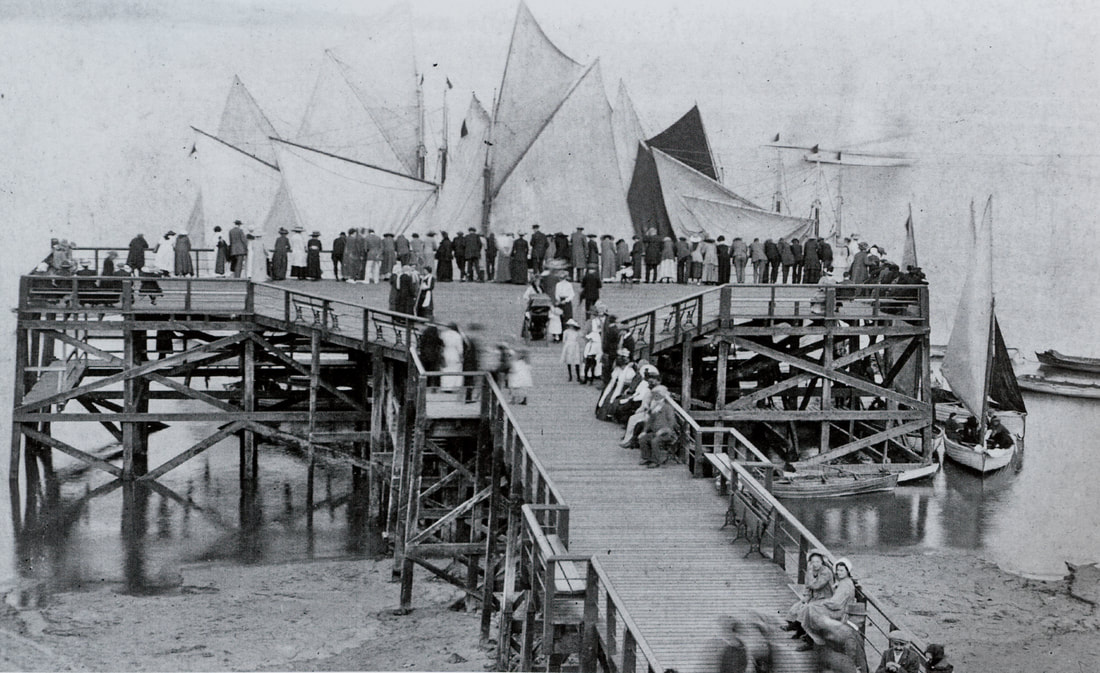 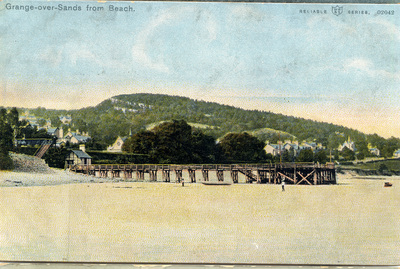 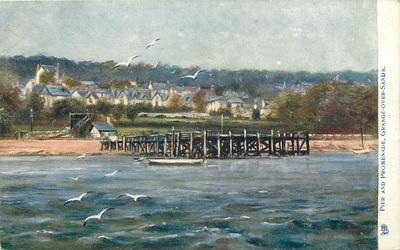 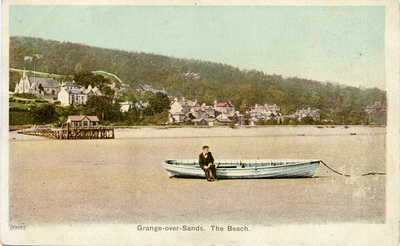 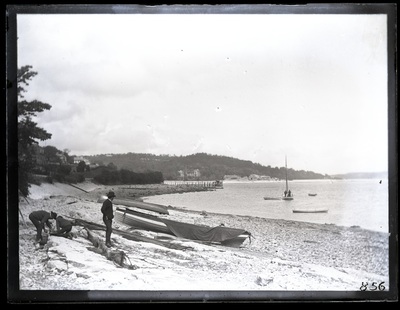 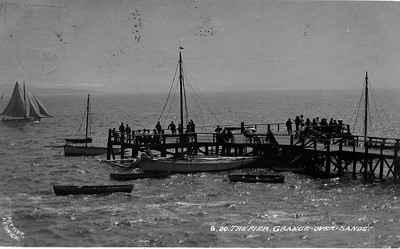 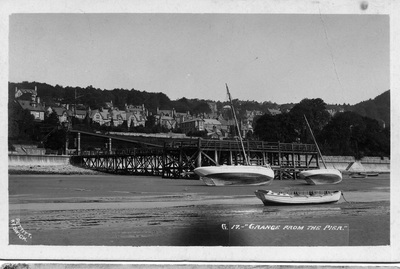 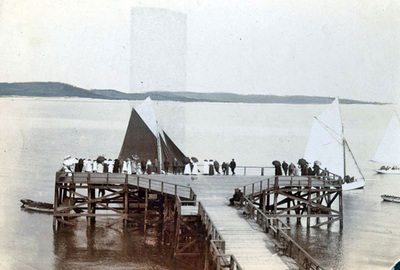 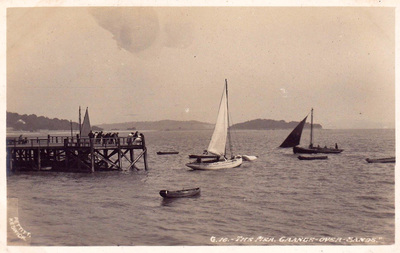 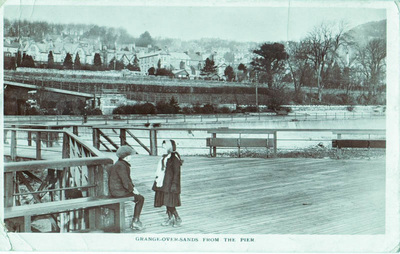 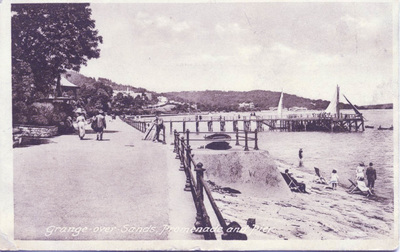 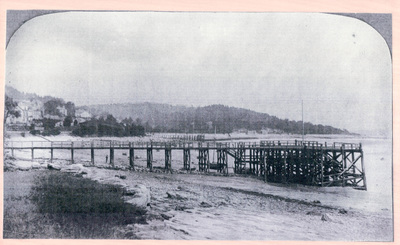 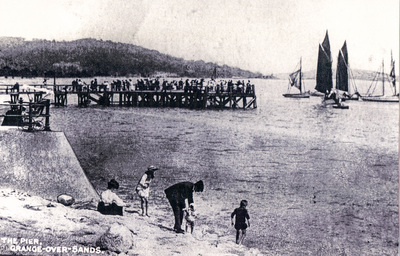 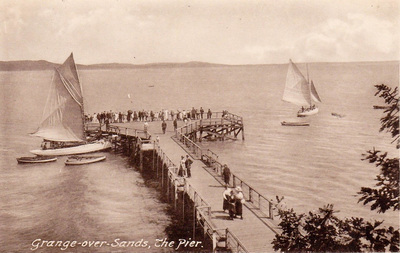 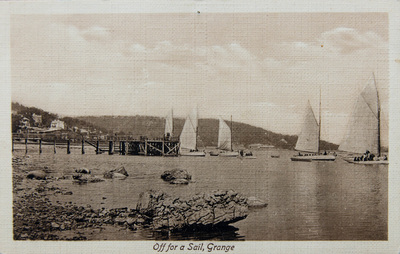 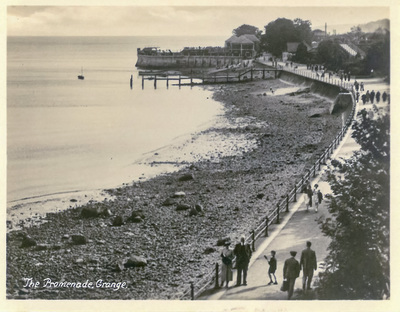 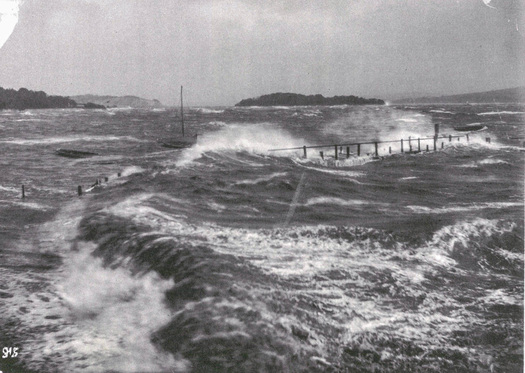 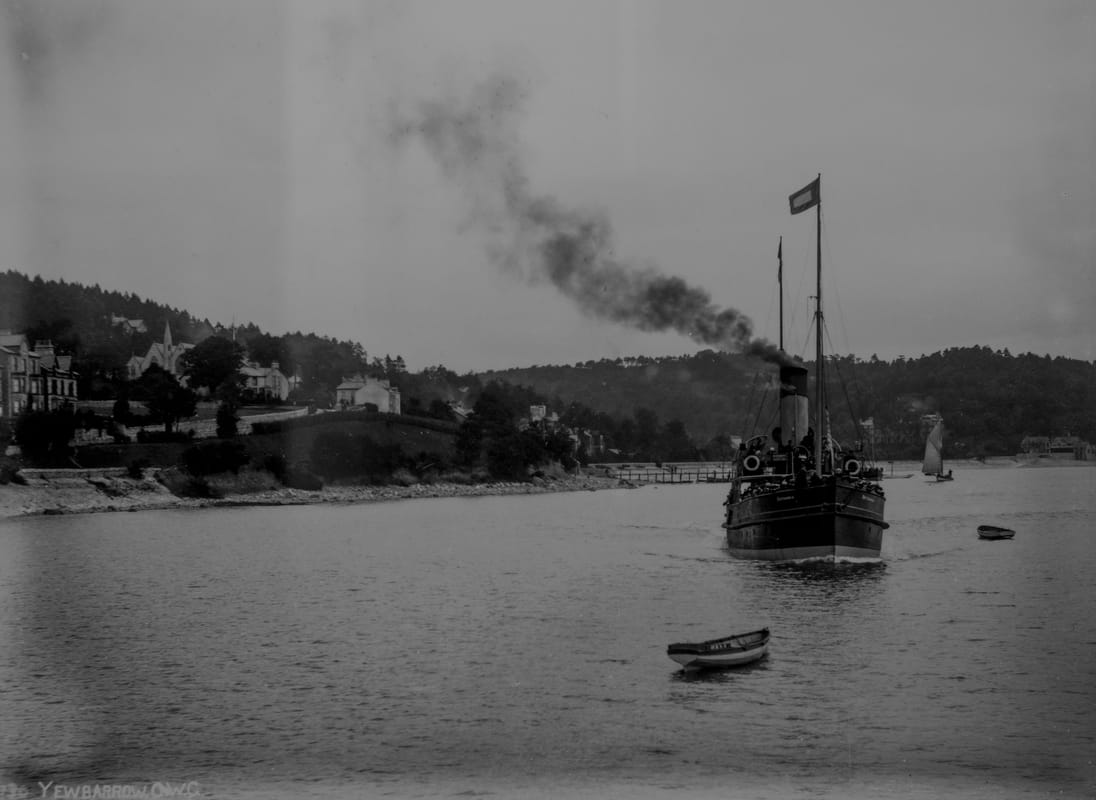 This undated photo shows a large building by the toll building at Clare House Lane. I don't know what this is though....... 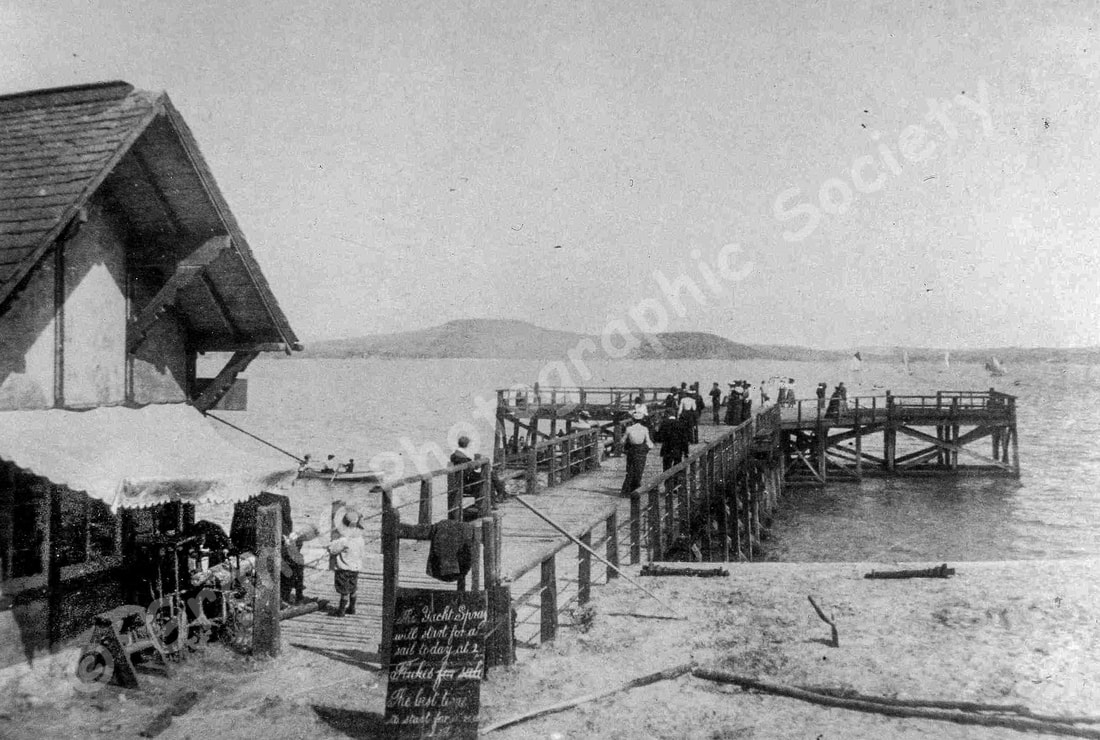 From the Grange Then Project (2000), this is Clare House Lane Pier, with the Yacht Spray being advertised as sailing at 2pm - and flukes for sale. You can see the uprights for the promenade railings ready to be put up.
Two photos of unknown date showing ice in the bay below Bailey Lane pier 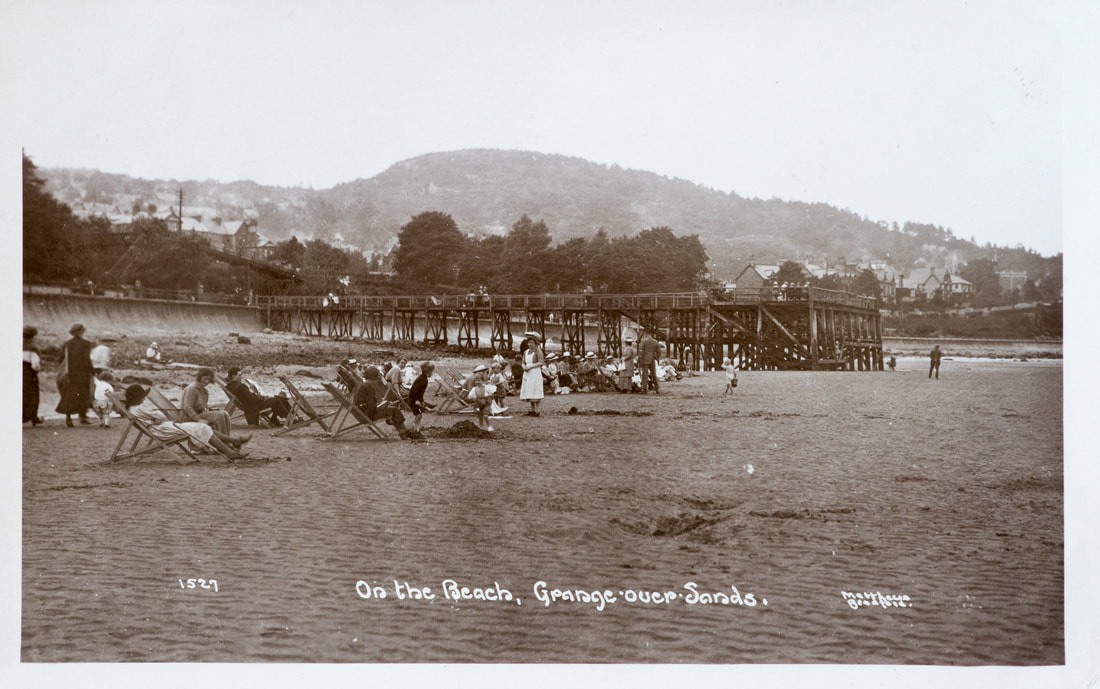 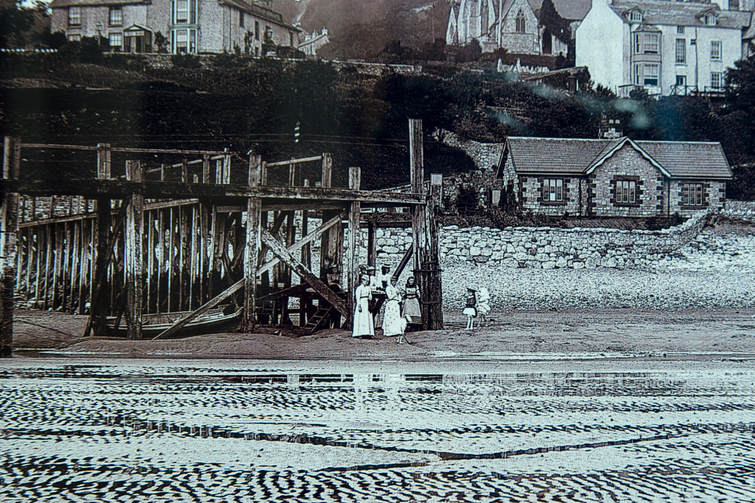