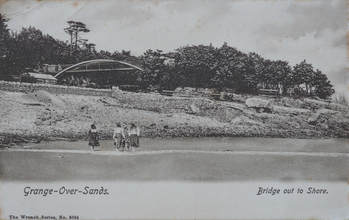 The bridge at Blawith Point before the prom was built.
During the early years of the railway, there were fewer crossings onto the shore than there are now.
​

The pier at Bayley Lane, with the crossing visible at the end of it. 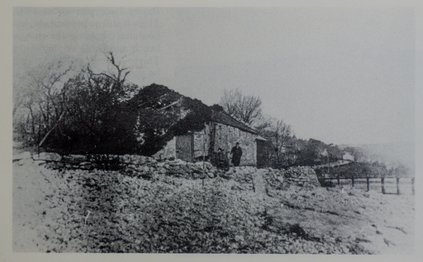 Clare House Pier before the prom. There was a large building of some nature here - possibly a store? 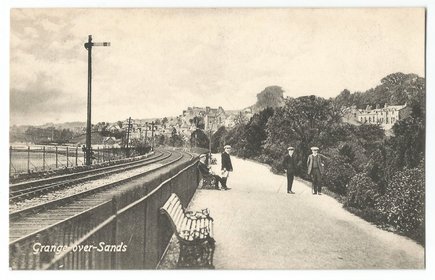 The first ‘promenade’ in Grange was the short stretch between the railway and the Ornamental Gardens – this was built during the time that both were being developed.  However, it was, obviously, cut off from the sea itself.

​
Garnett’s Shilling Series Guide to Grange (probably 1869) included an interesting description of the shore and it’s approaches,  and concluded that “The great requirement of Grange is an extended promenade, which we venture to suggest might be constructed above the stone structure on the sea-side”.  The whole article is worth a read (below).
A number of photos and post cards show what the beach was like before the promenade was built. 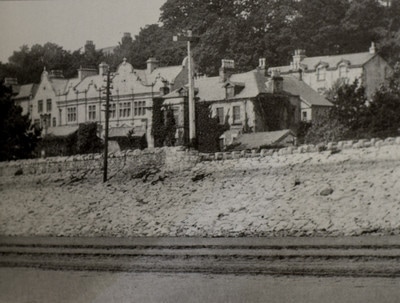 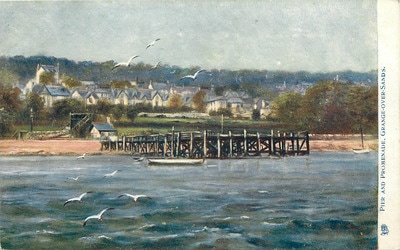 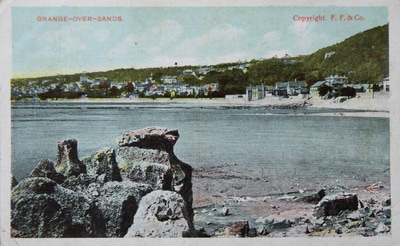 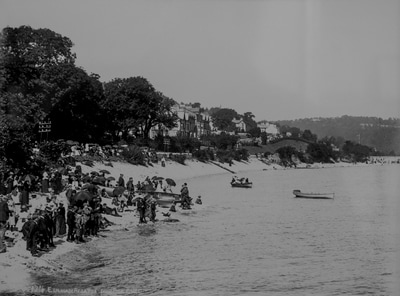 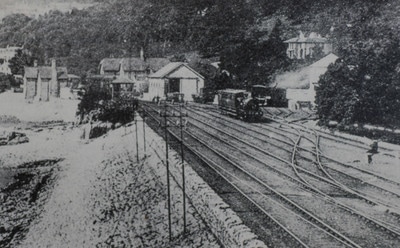 In 1897 Grange Urban District Council proposed a project to create a new sewage system for the town (see water supplies).  To link up the various parts of the system, a mains sewer was proposed along the sea side of the railway embankment – westwards from the station.  In June 1897, Grange UDC agreed to spend £10,000 on the project.

Harold Porritt, JP, came from a rich Lancashire textile family (Joseph Porrit & Sons) who owned Sunnybank Mill at Helmshore, near Blackburn and had first visited Grange in 1895 and fell in love with the town.  He moved to the town soon after and was subsequently elected onto the UDC becoming Chair of the Highways Committee in 1901.  He became one of Grange’s most prolific benefactors, and led the way in improving the town’s amenities.

He suggested that the Council built a promenade to cover the pipes, as had been done with The Embankment alongside the Thames.  The Council liked the idea, but didn’t have enough money to do this – so HP gave UDC the funds.  But also gave enough to fund the tea room, the shelters and the bandstand.  He also provided money for Clare House Lane bridge to have a ramp – and this was because a number of visitors to Grange used bath chairs and he wanted them to be able to get to the prom – the photo shows the datestone on the bridge supports if you look carefully.  For the same reason, he insisted upon both ends having access through subways.

The land was purchased from the Duchy of Lancaster (who owned the sands and the foreshore) in 1902 for £670.  The land purchased was all the way to the level crossing at Cart Lane, although the promenade itself doesn’t go beyond the underpass.
Harold Porritt actually wanted the promenade to go all the way along to Kents Bank, but the townsfolk were concerned that Grange might develop along the lines of Morecambe or Blackpool (!) if this happened, so they said ‘No Thanks’. 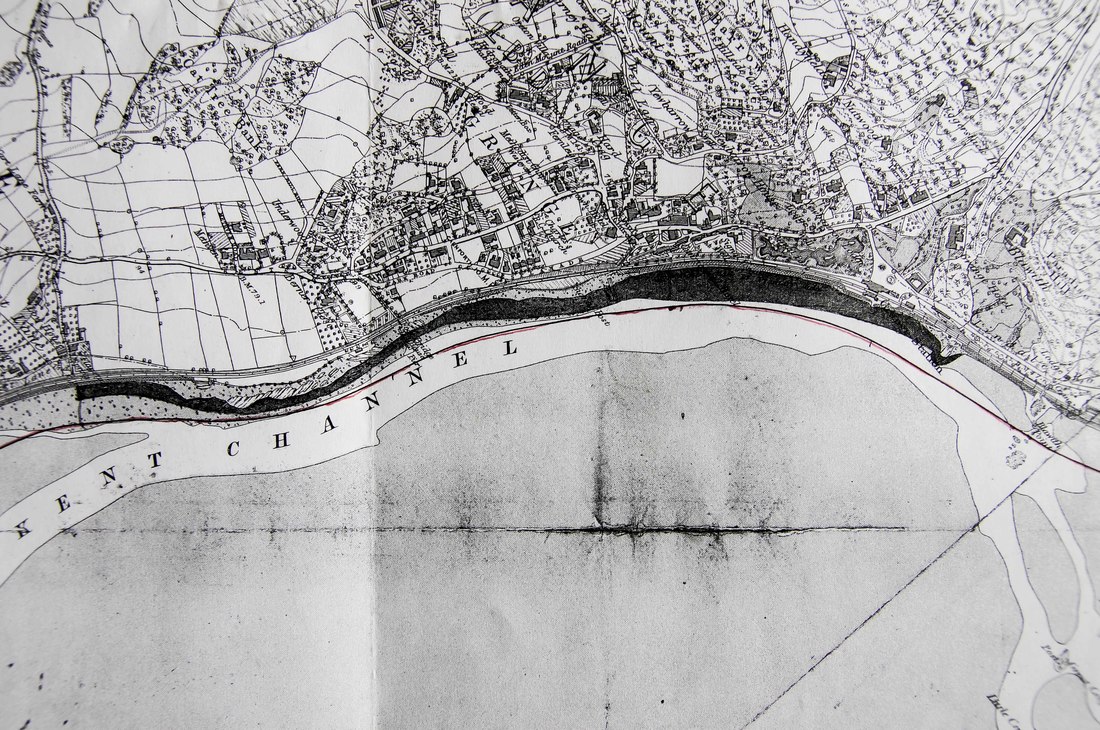 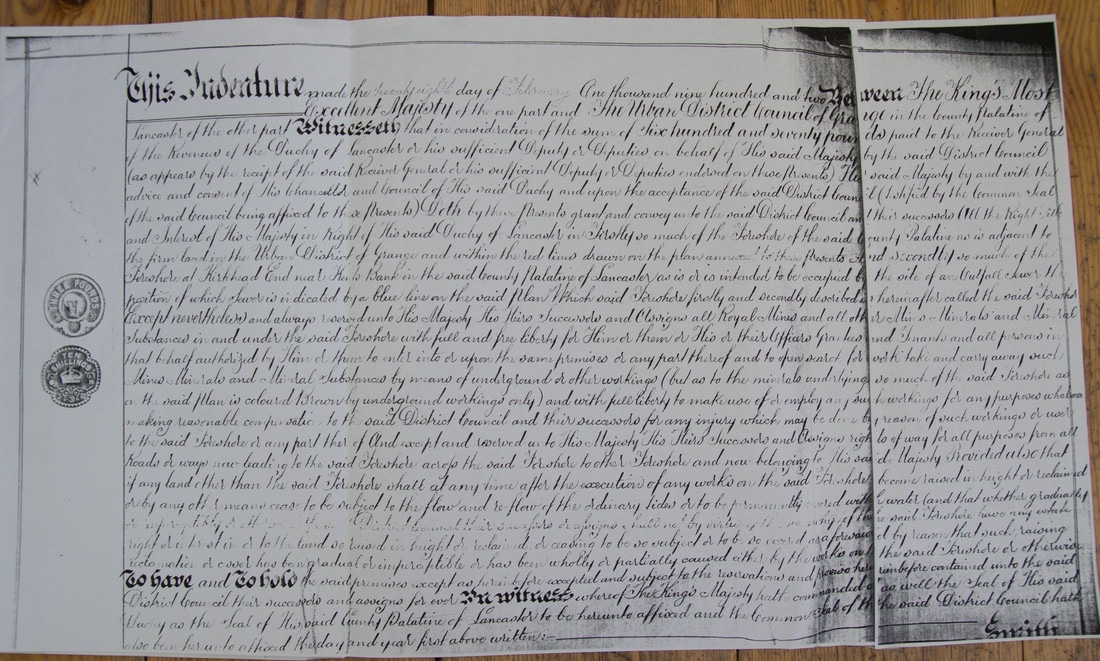 There seems to be a little confusion over the precise dates of construction, and who did what work.  Some sources say that the stretch from the station to Bailey Lane was the first to be built in 1901 by the Furness Railway, with the rest heading southwards completed by GUDC in 1902-1904.  One source adds that ‘For completeness, this was extended to the bridge at Blawith Point’.

No real documentation still exists.  Grange Town Council has a number of estimates relating to the sewage pipe work, but little in direct relation to the promenade construction itself.

One piece of paper seems to be a rough estimate and description, with a ‘back of the fag packet’ drawing on the reverse – which actually looks remarkably similar to the final construction!
​A letter of 1897 to the Council (below) describes the construction in a bit more detail, and a recent survey carried out for SLDC explains more restrospectively.  Basically, a low sea wall was built – sometimes on the base of the railway embankment, sometimes on bedrock, and sometimes on new foundations in the sand (which are by-and-large now covered with sand/silt/grass).  On top of this wall there was then built a bulnose wall raising the total height to total varying between 2’7” and 9’ (the construction joint between the two sections is still visible). ​ 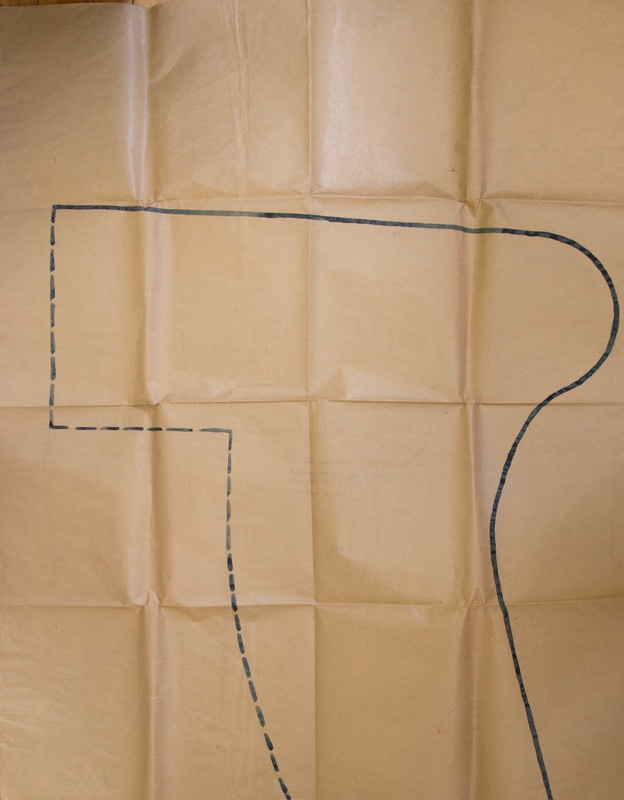 What appears to be a life size drawing of this bulnose top section exists on a large piece of brown paper in the Town Council’s archives.
​
​The space behind the wall was then filled in with sand dredged from the bay.  The 1897 letter explains how this was planned to be done – with a floating suction dredger.  It also describes the potential difficulties because of the tides and bad weather, suggesting that it could only work 6 days a fortnight for 4 hours a day, with the distance for the sand to be pumped at times 150 yards.

The concrete used does not appear to have been anything special – it is without any steel reinforcement.  It is mass concrete with a high percentage of coarse aggregate, and a low percentage of fines and cement paste – probably done to minimise costs at the time.  The exposed surface has a higher percentage of fines and cement, and looks to have been hand applied once the coarser concrete had set as there are no framework or shuttermarks visible.
​
The 1897 letter also talks about an estimate of £22,500.  Which together with the sewer works and land purchase made quite a tidy sum.

The top surface is today (2016) tarmac, and it is probably likely that it has always been so.  Photos of the era give no indication of things like setts or cobbles – except for the ramp down at the station.  Indeed, a postcard of the ‘New Esplanade’ shows a tarmac surface below Bailey Lane.  Tarmac had been ‘invented’ in about 1901, and was locally produced at Trowbarrow Quarry just across the Sands.

The ball finial cast iron railings are also original to the Edwardian Promenade and found preserved along the entire length of the structure.  One postcard shows the prom almost completed, but with the railings (or part of the railings) still to be done. 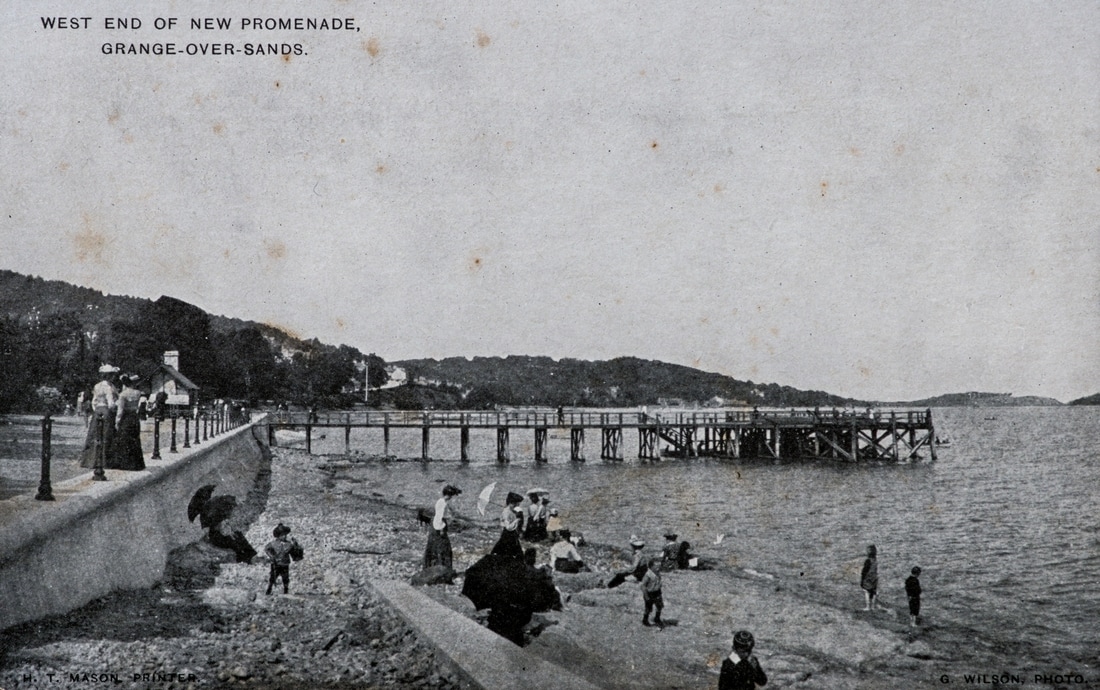 The scale of the works was huge.  For instance, on 3 May 1903, 57 men were employed in unloading and storing cement at the station sidings.  They unloaded 1100 bags of cement, along with 16 tons of sand and 120 concrete flags – as well as machinery and other raw materials.  And this was just one day, the note by Thomas Huddleston (GUDC Engineer) mentions other similar Sundays. 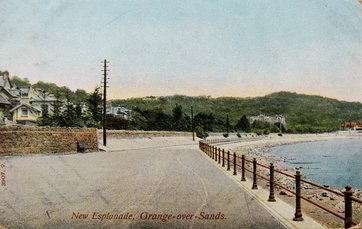 The Promenade became the main attraction of the town and has been the focus of tourist activity since its construction. It was the heart of Edwardian Grange featuring many of the town’s main attractions.  The tea rooms, bandstand, gardens, flagstaff, shelters, ample supply of seats & benches, and the flowerbeds were all part of the original proposals by Harold Porritt – and again funded by him.  Most of these were designed and created between 1902 and 1913, although the stretch northwards from Bailey Lane must have been later, as photos of the late 1920s just show the railway embankment.  The flowerbeds were designed and planted by council’s head gardener Anthony H Benson, and were established in around 1910.  All the buildings are similar in style, with nods to the Arts and Crafts movement.  The tea rooms on the prom area a good example, being a ‘mock’ half-timbered structure with a prominent bay window which would have looked out over the bustle of the pier landing.


This early photograph of the ‘New Esplanade’ shows how bare the rock embankment was when the prom was first built.  Compare this to now – when the flowerbeds are full of life and colour all year round.

The crossing at Berners has varied over the years.  There was previously a level crossing where the cafe park their car – as the old stoops existed until recently.  The level crossing was moved to the current location when the Lido was built in 1930/2, and a bridge for the public was built at the same time.  The level crossing itself has never been public, and the bridge was removed in 2006 by the District Council because of safety concerns.  A public right of way still exists over ‘a bridge’ at this point, but it is uncertain whether a bridge will ever be rebuilt.
​There are literally hundreds of photographs and postcards featuring the promenade through the first half of the twentieth century.  Below is just a small slideshow selection of them.
Grange-over-Sands, pictures of Grange-over-Sands, photographs of grange-over-sands, photos, Bodian, photography, photographs, pictures, old maps, historic maps, Cumbria, South Lakeland, images, pictures, photos, Nick Thorne, Lake district, lake, district, Hampsfell, Morecambe Bay, Grange, Grange over Sands, Grange, over, Sands, maps, history, historic maps, councils