Old Maps of Grange-over-Sands and the surrounding area

One of the best places to see old maps of Cumbria and the Lake District is to visit  www.lakesguides.co.uk/html/lakemenu.htm - a fantastic resource of maps, photos and other interesting snippets.  Quite a few of the maps below are from here.

Kuerden 1685
This seems to be the earliest maps of the Grange area, probably drawn by Richard Keurden as part of a survey of the Cartmel part of Lancashire regionalheritage.omeka.net/items/show/67

One map shows 'Grange Green', which is clearly the cross roads of Grange Fell Road / Pig Lane / Kents Bank Road / Main Street.  The southern continuation to Kents Bank is reflected on the 1796 maps below.  The second map shows Grange at the bottom right, although it is unclear quite what it is depicting southwards of that same crossroads. 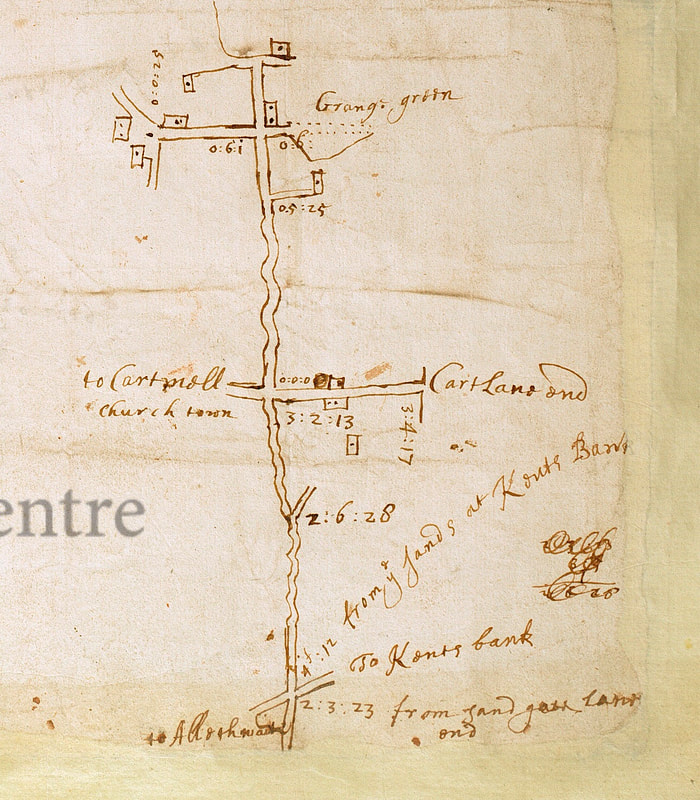 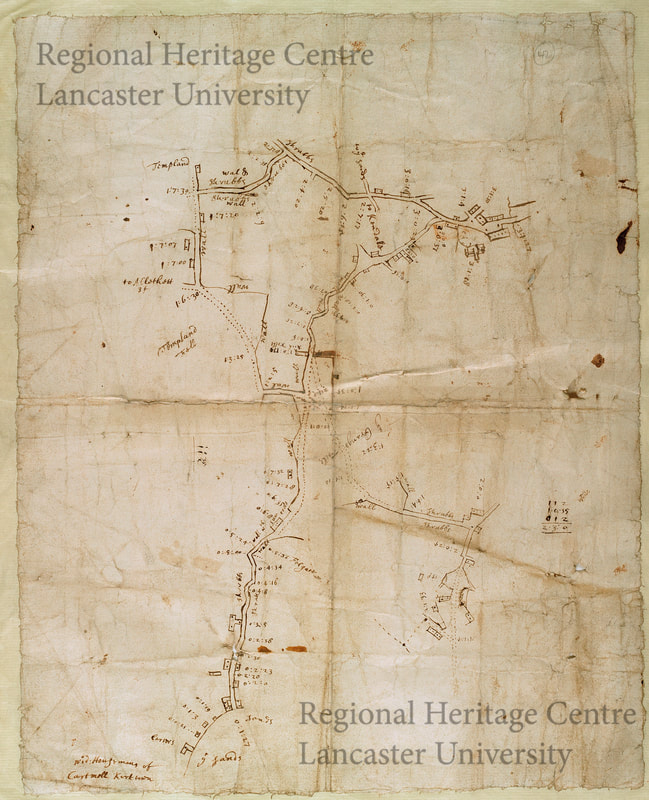 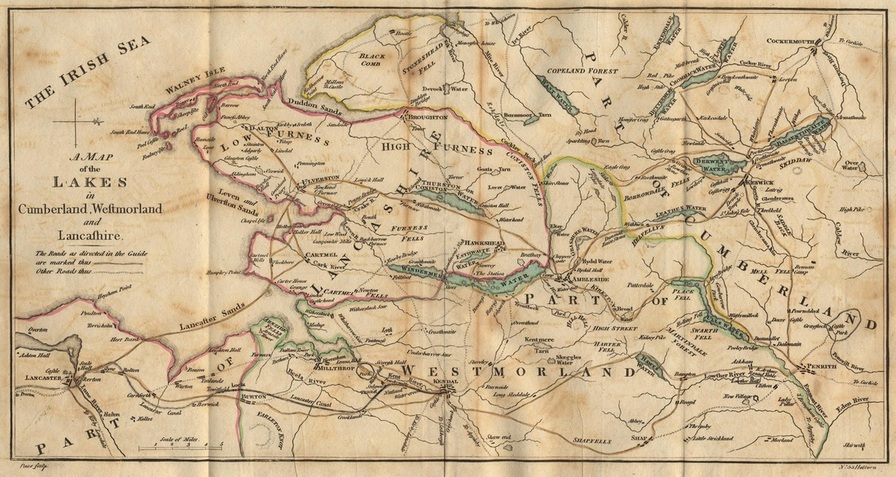 Two of the first detailed maps of Grange itself were drawn as part of the Enclosure Process for Hampsfield Fell and the Cartmel Fell Parish.  The originals can be seen in Kendal  Record Office.  This section just shows the centre of Grange, the original is much larger and covers the whole of the modern parish.  A larger area is shown on the third extract - which is useful for comparing with the 1685 maps. 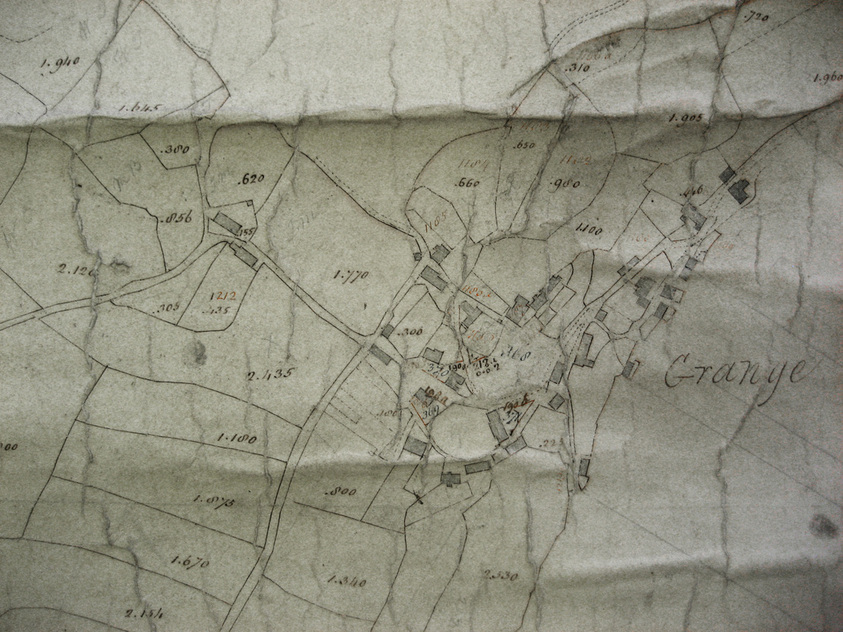 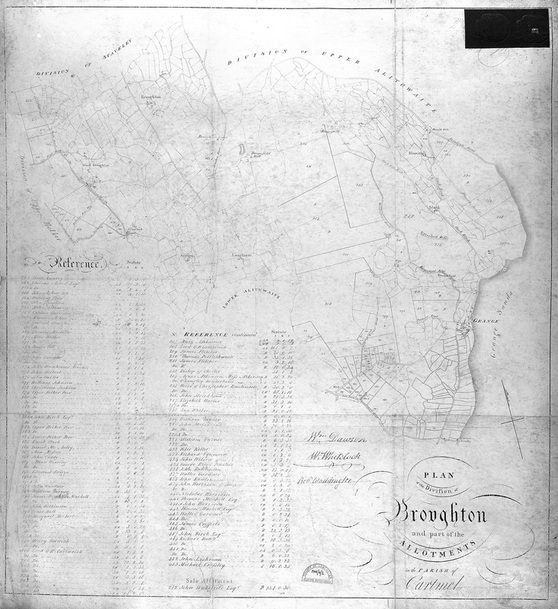 The remaining unenclosed lands within the large Cartmel Parish were enclosed under an Act of Parliament in 1796.  The document exists in the record offices in Preston and Kendal.  The map here is the one for Broughton Township (see history page) and is the copy held at Preston.  Click the map to see an enlarged version.

Greenwoods Maps of Lancashire 1818 - 1830
Christopher Greenwood was one of the most respected map makers of his time, and produced county maps for much of England.  His early nineteenth century maps of the area are generally reckoned to be the best of their era for accuracy - both in what they showed and in their measurement and scaling.

Quite simply - John Cary was THE mapmaker of his time.  He was appointed by the Postmaster General and also produced maps for the Ordnance Survey.  The ones around 1830 are of very high quality and accuracy - and can be overlaid on modern maps with surprising ease. 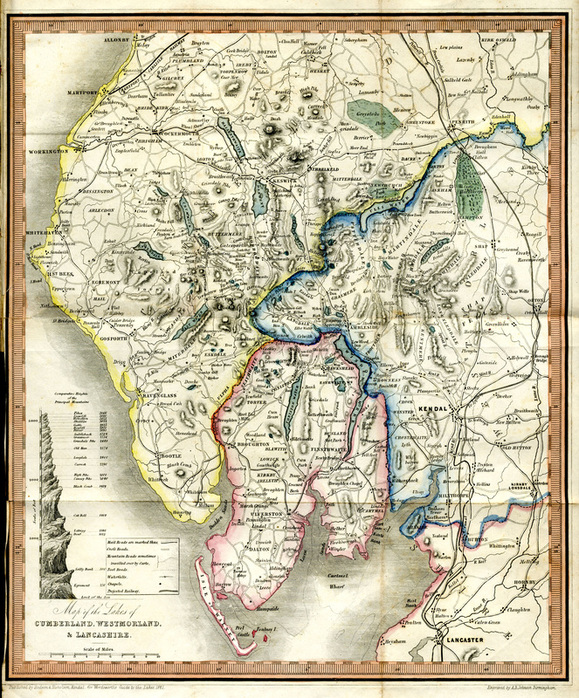 Ordnance Survey Maps - and others 1840 onwards

A really good resource is the Vision of Britain website - where you can scan in on some early Ordnance Survey maps by entering a Grange-over-Sands postcode.
Click here for the first edition

Also - try out the  National Library of Scotland Website - the quality is excellent, and most OS maps from 1840 to 1940 are there. 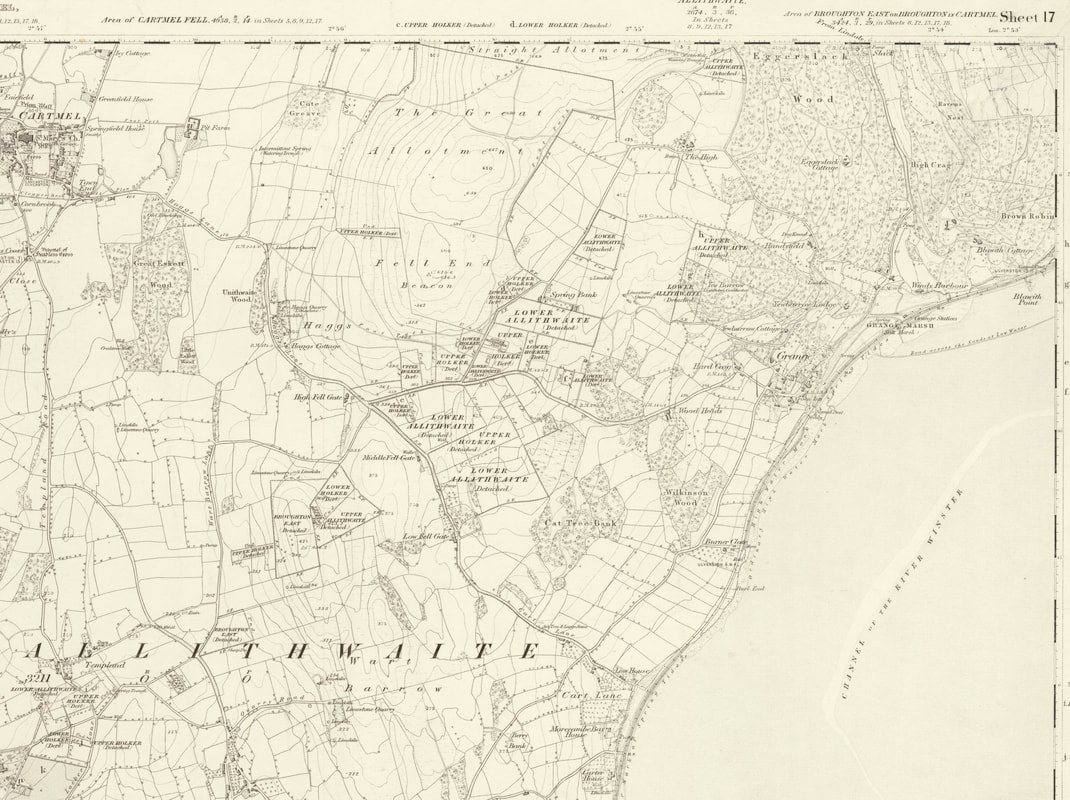 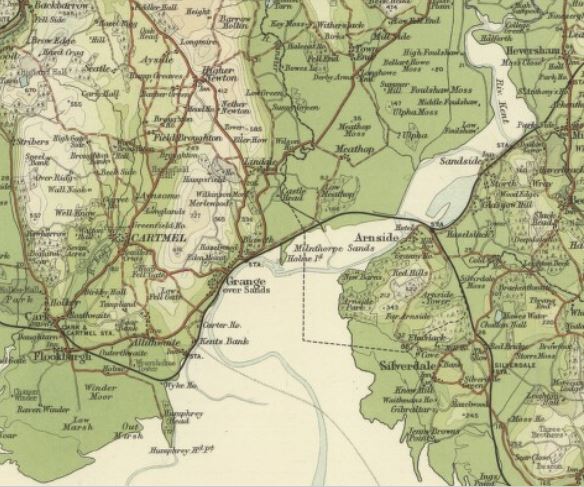 ​John Bartholomew produced maps countrywide, of high quality.  Many were copies from OS maps.  There were numerous repeat editions, all aimed at different markets.  This one is from 1905.
​ 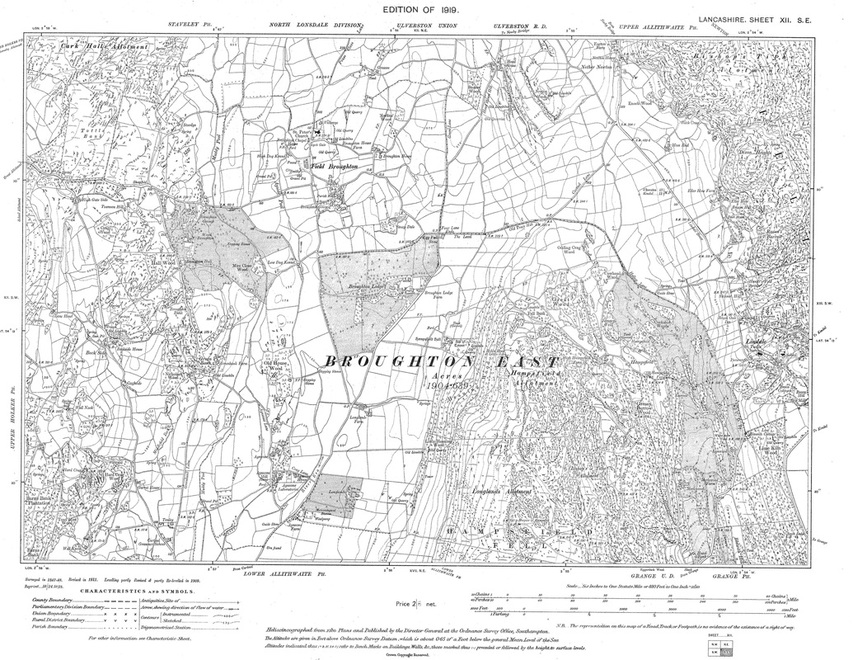 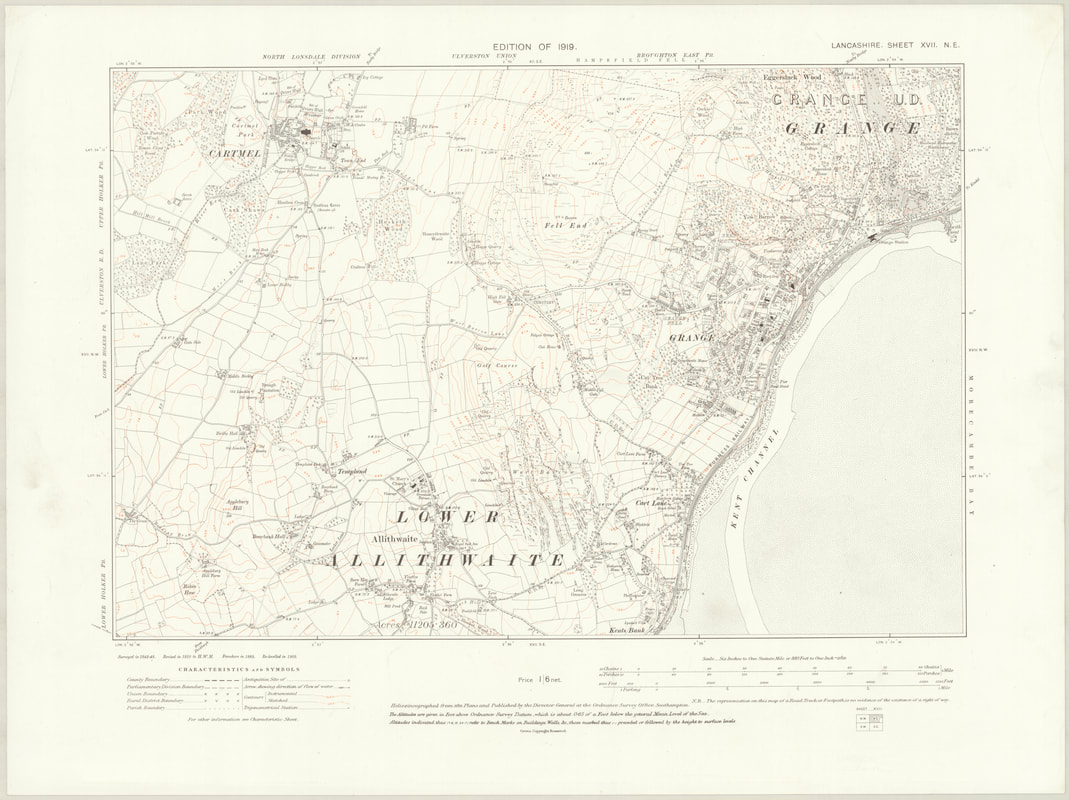 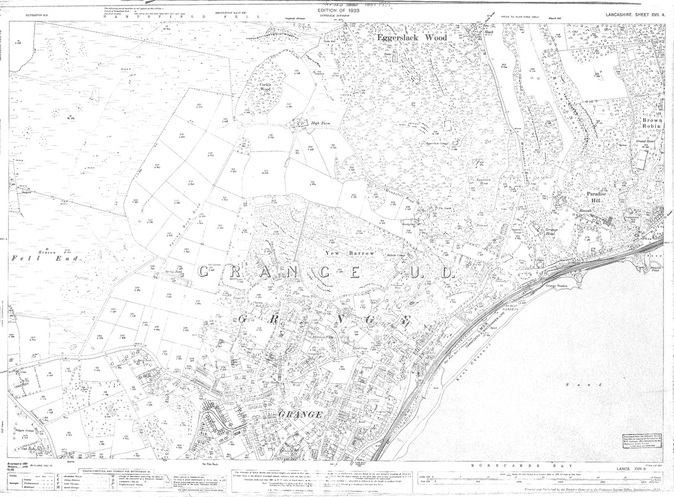