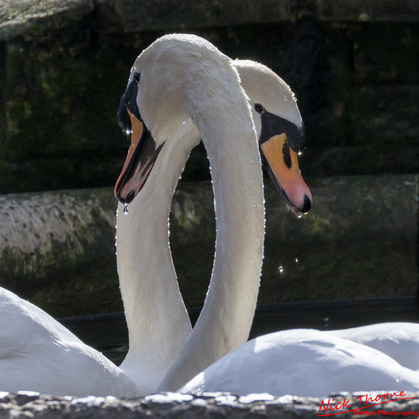 Swans in Picklefoot Spring - 2014
"Picklefoot" takes its name from walnut pickers who lived in Main Street and is both a natural spring, and site of Grange's most productive well with approximately 60 gallons of crystal clear water per minute flowing into the duck pond. Records show that this spring has never run dry. In 1945 (or 1946 depending on the source) a serious drought affected Grange when its main reservoir emptied, an event that led to the erection of a small pumping station nearby to supply townsfolk with water. Picklefoot lived up to its reputation and continued to flow.  And see below for an article in the newspaper of 1955.

There used to be setts forming a track down to the well so horses and carts could get down to it to cart away water.  Before the railway, the tide used to come up to the houses.  It covered the spring, but after the tide went out it soon cleared and ran fresh again.  But this did mean that residents had to take buckets of water for their use before the tide came in!

There are other wells in Grange, some were used by certain households who had deeds to prove their water rights.

(Mostly taken from the Blue Plaque near the spring).

The secret door behind the duck hut is a small building that houses the pump for the fountain, as well as the sump which is linked to the pond from which the pump draws its water.  The fountain does not work when the pond level is lowered before heavy rain or high tides (when the pond acts as a storage pool).

The spring was once the scene of a feud between locals and the Furness Railway Company.  The latter fenced the spring off and put a pump up on the roadway for use - but the locals weren't happy about this and repeatedly broke down the fence.  The railway company gave in, and took it away.