Tides of Morecambe Bay  Click here to go back to A-Z page
Collated from a document produced by George Parr, and from internet sites. 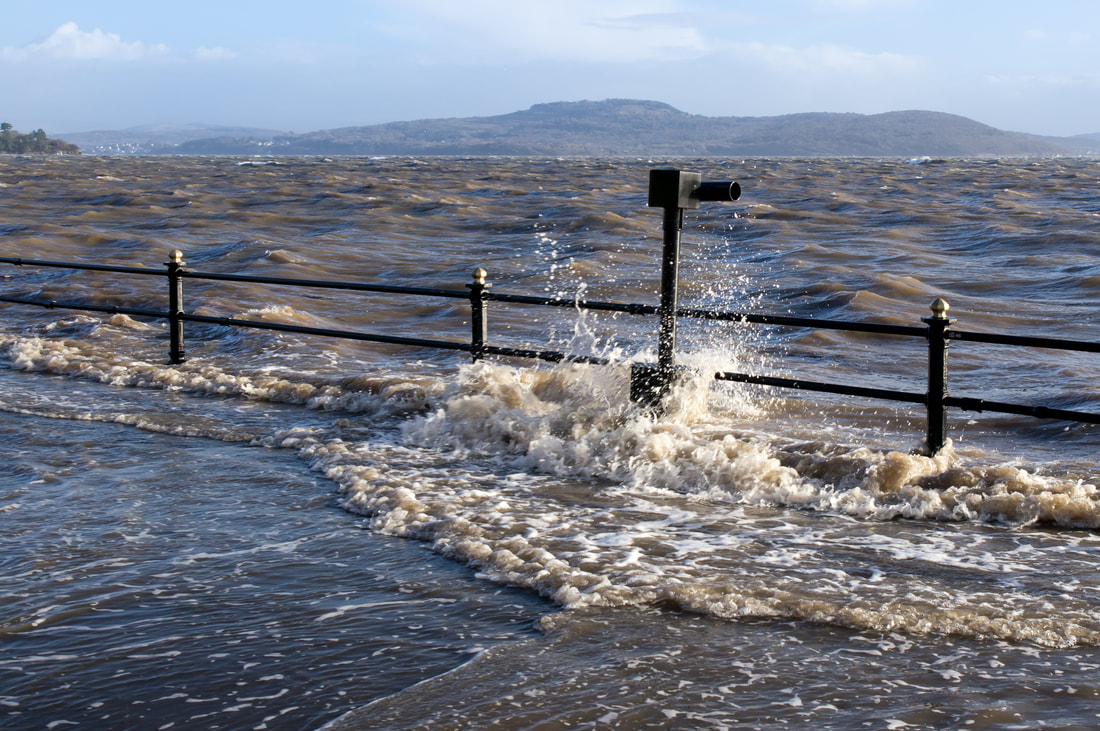 “The tide comes in faster than a galloping horse'

What Causes the Tides? https://scijinks.gov/tides/

High and low tides are caused by the moon. The moon's gravitational pull generates something called the tidal force. The tidal force causes Earth—and its water—to bulge out on the side closest to the moon and the side farthest from the moon. These bulges of water are high tides.

What Else Affects Tides?

​The sun causes tides just like the moon does, although they are somewhat smaller. When the earth, moon, and sun line up—which happens at times of full moon or new moon—the lunar and solar tides reinforce each other, leading to more extreme tides (highest high tides, and lowest low tides – largest tidal range), called spring tides.
When lunar and solar tides act against each other, the result is unusually small tides (and smallest tidal range), called neap tides.

There is a new moon (which we can’t see because no sunlight falls on it) or a full moon (big and visible, as it reflects the sun) about every two weeks (when there has been half a circuit of the Moon around the Earth, which takes about two weeks), so that's how often we see large spring tides.  Tidal events do not happen on the same day as the lunar event that causes them, but a day-or-so later.

Wind and weather patterns also can affect water level. Strong offshore winds can move water away from coastlines, exaggerating low tides. Onshore winds can push water onto the shore, making low tides much less noticeable.
High-pressure weather systems can push down sea levels, leading to lower tides. Low-pressure systems—brought on by strong storms and hurricanes—can cause tides that are much higher than predicted.

The Earth goes round the Sun every 24 hours, but the Moon goes round the Earth once every 29-30 days, therefore the Moon is always in a slightly different place relative to the Sun at the same time every day.  So; the time of each day’s greatest pull of the moon-plus-sun combined gravitational effect happens one hour later than it did on the previous day; so each day’s tides (both day tide and night tide) happen about one hour later than yesterday’s.  But at the end of a lunar month, everything will be in line again at almost the same time.   This means that the time in the day (or night) when, say, High Water Spring Tides happen are nearly the same time of day – which in Morecambe Bay is early afternoon.  High Water Spring Tides in the Bay always happen in the early afternoon of whatever day they happen (but not the same days).  This is why Cross Bay Walks take place when they do.

https://tides4fishing.com/tides this is a simulation showing the combined effect of the sun and moon tides during the cycle.

The times and heights of tides are listed in ‘Tide Tables’ booklets.  These give predictions of what will happen on a “normal” day; that is - when the atmospheric pressure is neither unusually high nor unusually low, nor is it very windy.
The UK’s main Tide Tables are worked-out for major ports using continuously-updated historic records for those “standard” ports using the known future movements of the moon and the earth. These Tide Tables for standard ports are used to derive Tables for significant secondary ports.  For example, Barrow’s Tables are based on Liverpool’s.   For less-important places, like Grange-over-Sands, it is a case of do-it-yourself, using information from the major tidal almanacs that are used by mariners.  Barrow’s Tide Tables are good enough for Grange.  The differences are not significant for nearly all purposes (high tide is generally about 20 minutes later).

Tables can be found here:
https://tides4fishing.com/uk/england/ulverston#_tides
https://marine.meteoconsult.co.uk/marine-weather-forecast/tide-times-barrow-in-furness-40-0.php - for the year ahead
​www.tideschart.com/United-Kingdom/England/Lancashire/Morecambe-Bay/Water-Temperature/ - water temperature and other interesting information (tide times are 20 minutes ahead of us)​
​Tidal Range in Morecambe Bay

The shape of Morecambe Bay generates a very large Spring Tidal Range.  If the Low Water Level for a Spring Tide in the Bay were close to Chart Datum level (= zero metres CD), the High Water Level would be above 10.0m CD.  This Spring tidal range for Morecambe Bay of about 10.0m is exceeded in only a few places in the world.

In any year there are usually few Barrow Spring high tides of 10.0m CD (Chart Datum) or more; for several Spring Tides in a year the high tides will be less than 9.0m CD.  Because Chart Datum is the lowest possible Low Water Level, all tides start to rise from a level which is higher than 0.0m CD.   This means that every tide will have risen through a height less than its highest level.  Even so, in Morecambe Bay the tidal range is bigger than the tidal range for most places worldwide.  An enormous volume of water flows into the Bay during a flood tide.  Fast speeds of tidal flow are required to get this huge volume of water into the Bay during the six hours of a flood tide.

Chart Datum level (0.0m) is out at sea, somewhere at the outer limit of Morecambe Bay.  That would be the Low Water Level for the most extreme Spring Tide.  High Water Level for such a tide would probably be about 10.7m CD, so its tidal rise would be about 10.7m.  Because the sands in the Bay slope downwards towards the Irish Sea at a very shallow angle, the tidal front of a flooding tide travels many kilometres across the sands when the tide rises by, say, 10.0m.  This happens as a tide floods in one tidal half cycle (about 6 hours) between Low and High Waters. The fastest advance of the incoming tidal front across the sands happens at mid-tide, when sea level is rising at its fastest rate .

At Grange Prom a high tide lower than about 9.0m will still be at the edge of the grass bank (2019).  A 9.0m high tide will just start to cover the shore grass.  A high tide of more than about 9.0m will cover the grass and advance up to the Prom.  A 10m high tide is towards the top of the prom.  But the weather is likely to affect this prediction.
The promenade when constructed in 1904 was designed to be just above the highest high tides.  The sea only actually comes over onto the promenade when there are specific combinations of atmospheric pressure, wind speed, and wind direction.  For instance, low atmospheric pressure and a strong wind from the south can raise the sea level at the promenade by more than a metre.  And vice versa.

The Bay sands, out beyond the shore grass, are lower than 9.0m CD.  This means the advancing tidal front for, say, a 9.0m high tide moves up the estuary across the sand some time before the time of the High Water.  After this (flood) tidal front has passed through, the whole Bay offshore from the Prom fills with water as the sea level rises towards that tide’s highest point.
Observations made By George Parr over about 14 years show that the earliest time that the tidal front for a 9.0m flood tide passes the Prom, moving inland towards Arnside up the Bay’s main river channel, is a little less than two hours before the high tide times listed in the Barrow Tide Tables.  The weather affects this, and it should be taken as very approximate.  As a rough guide, it is reasonable to say that in Grange we experience, at the most, something like the last two hours of a flooding tide’s 6-hour half-cycle of a rising tide.

The high point for some Neap Tides is only a little more than the level of the water surface in the river channel through the sands at Grange.  Then the flow in the channel is affected in only minor ways by the flooding tide, even at high tide. 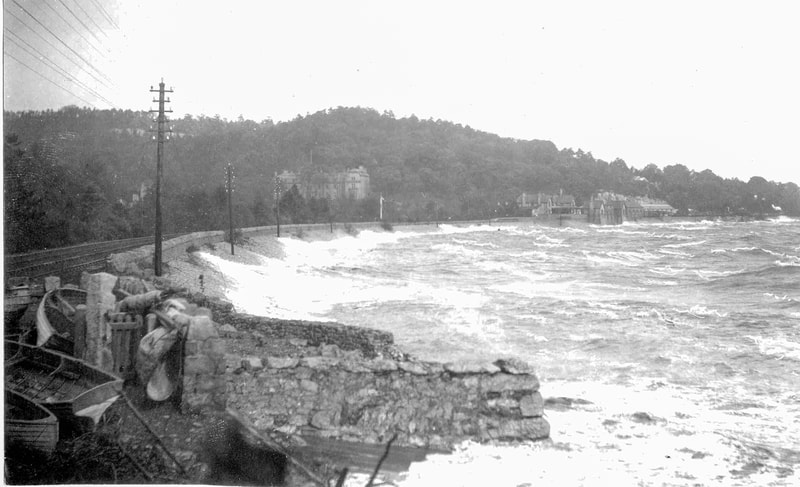 Before the prom was built - this is Bailey Lane crossing 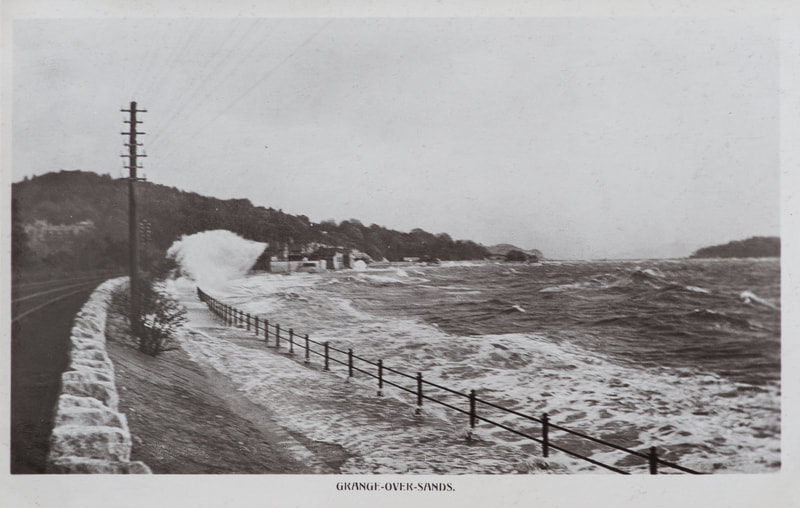 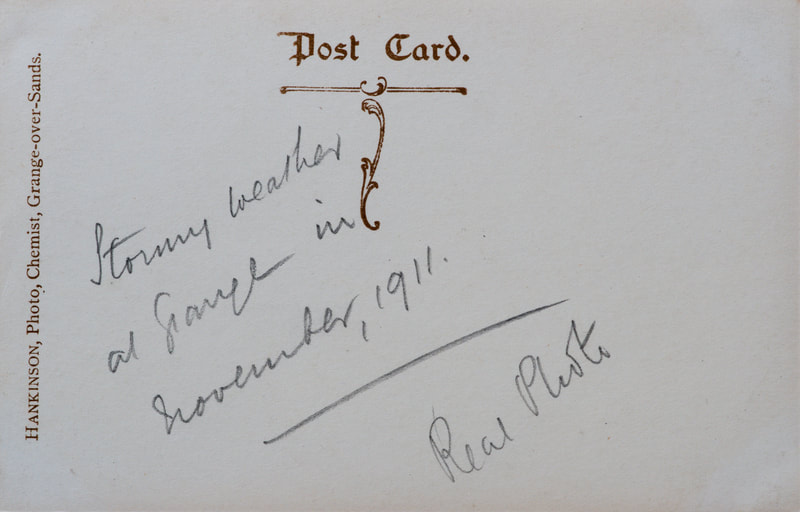 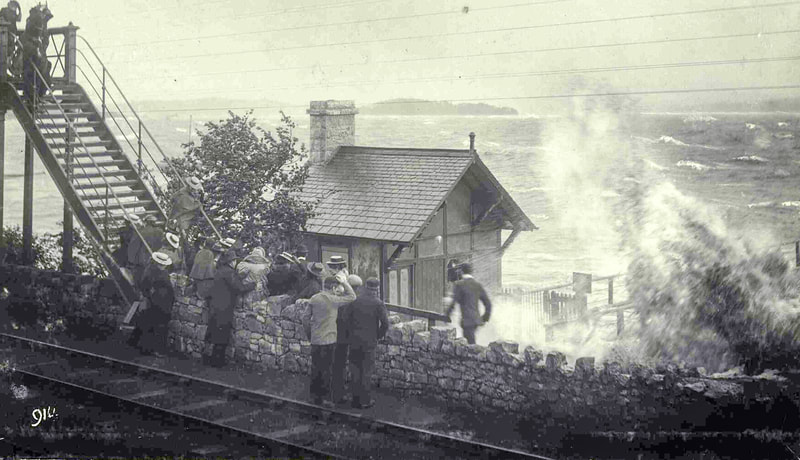 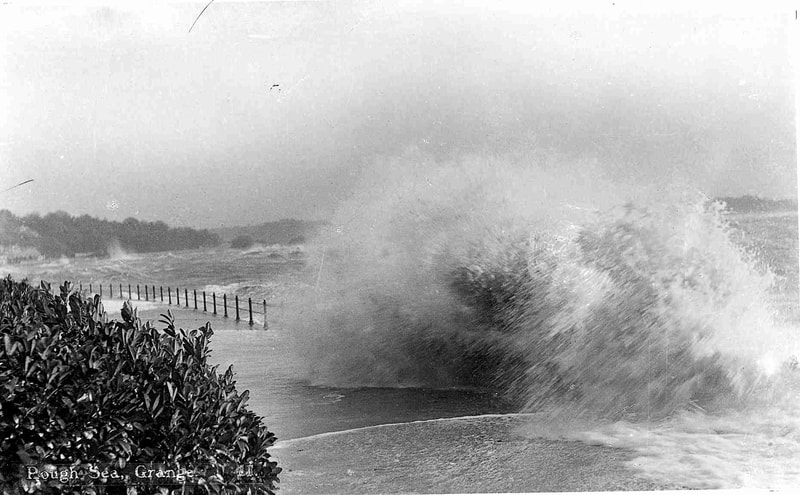 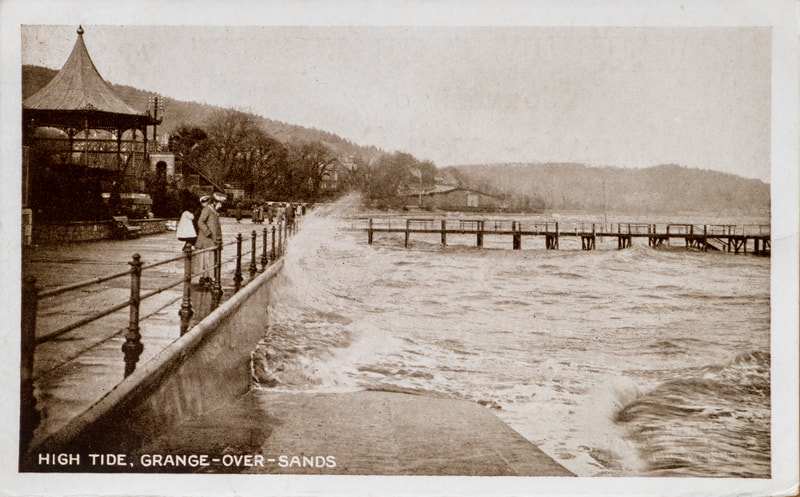 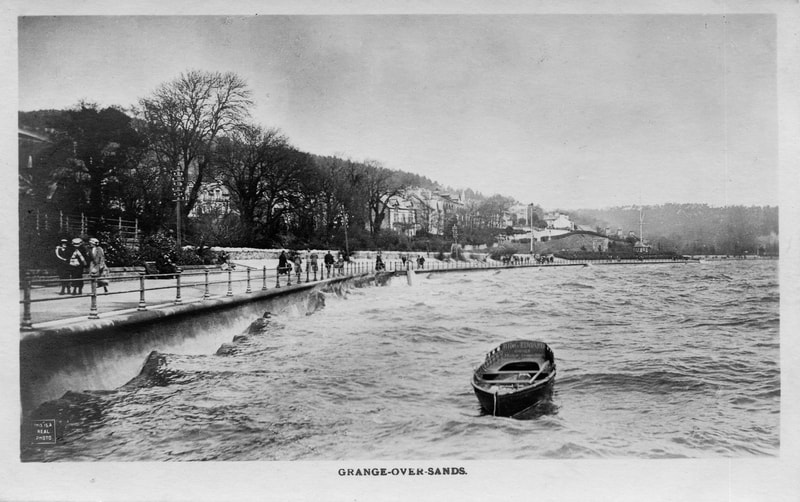 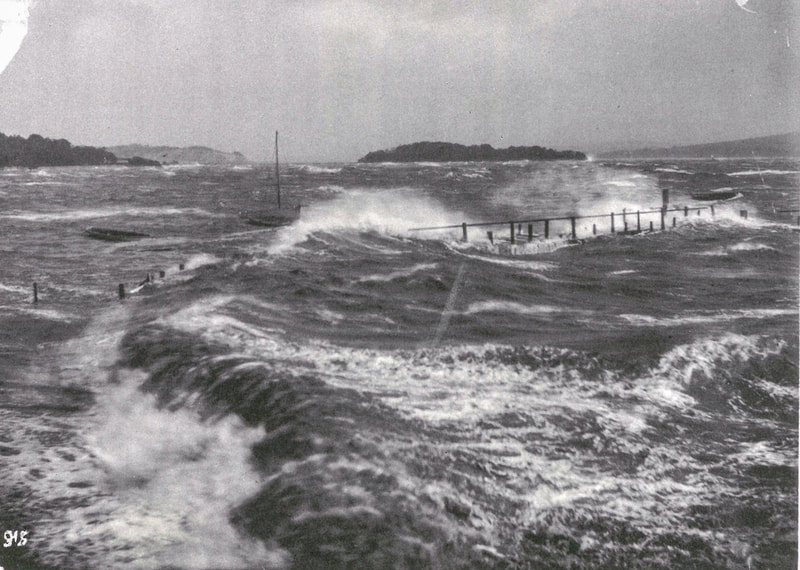 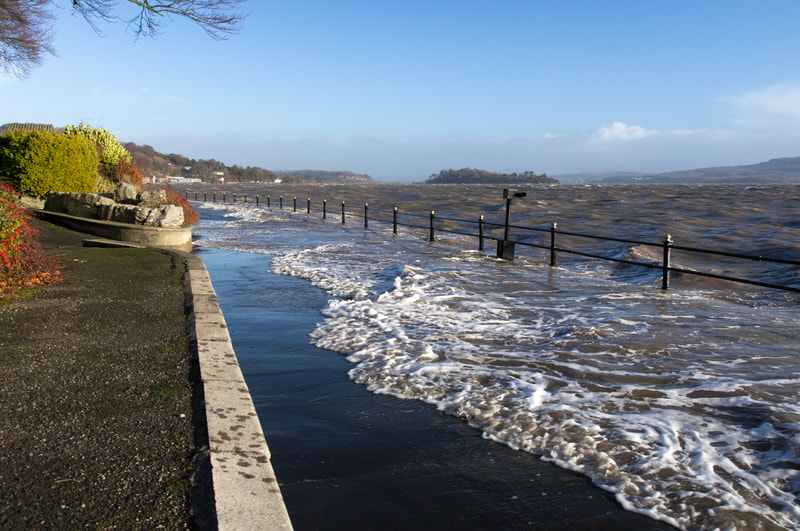 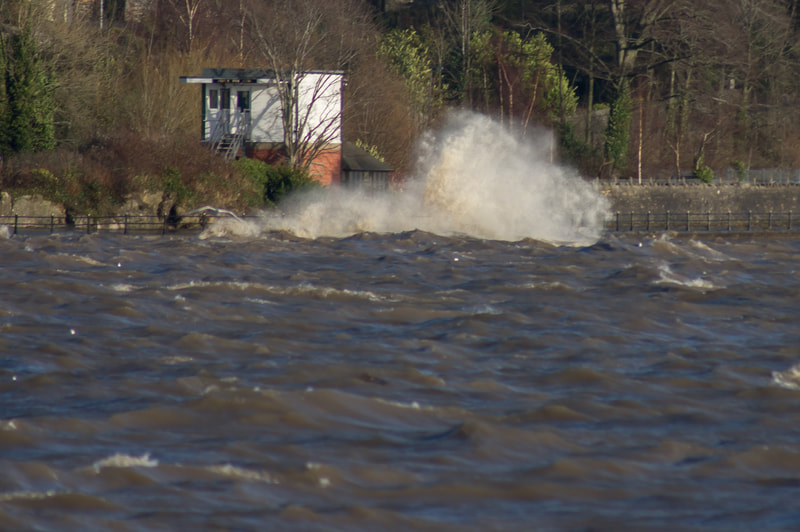 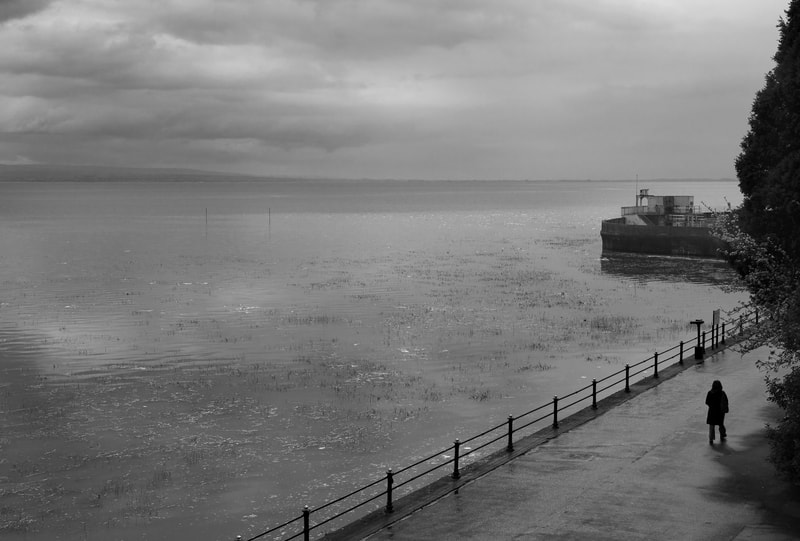 In general, the flow of shallow water in a channel is slower than deeper water in the same channel. This is because the shallow water is all close to the bed of the channel, and the bed friction slows all of that flow.  During a flood tide in the Bay, the tidal front moves fastest up the main channel, where the water is deepest.  The tidal front in the channel tends to move ahead of the slower-moving tidal front that is advancing across the sands each side of the channel.  At about mid-tide for a flooding Spring Tide, the depth of the water in the main channel is increasing quickly.  The deeper water behind the advancing tidal front moves faster than the shallower water at the advancing tidal front.  When the faster deep flow overtakes the tidal front it “trips over”, or “gobbles up”, the slower tidal front.  Then the advancing tidal front becomes a breaking wave – the tidal bore.
The bore develops best in a well-defined channel that is not very deep, and for a Spring Tide.  If it stays in a channel, the bore does not dissipate by spreading sideways over the sand and slowing down.  Everything about a bore is unpredictable, apart from the time it might appear.

Arnside is probably the best place to watch the bore because, not only is there a small pier, but South Lakeland District Council also provide a seasonal siren, to warn of the incoming tide. The siren is sounded twice before each daylight high tide, the first time roughly 15 to 20 minutes before the tidal bore is due (it is not an exact science). The second siren is sounded as the bore reaches Blackstone Point (New Barns), which is just further down the bay.  The bore runs about 1.5 to 2 hours before high tide, depending on the height of the tide (the bigger the tide, the earlier the bore arrives).

To have the best chance of seeing an impressive bore wave, it’s best to watch during a predicted tide of 9.5m or more (generally the lunchtime tides), or even better a spring tide. If this is combined with recent rain in the lakes (so the river is flowing fast and high) and a strong westerly wind, then it is at its best.
​
To calculate the approximate time to see the Bore, first click here to see the week’s tide predictions for Barrow (remembering to allow for British Summer Time if necessary), add 15 minutes for High Water at Grange/Arnside,  then deduct 1.5 – 2 hours from the predicted High Water time. 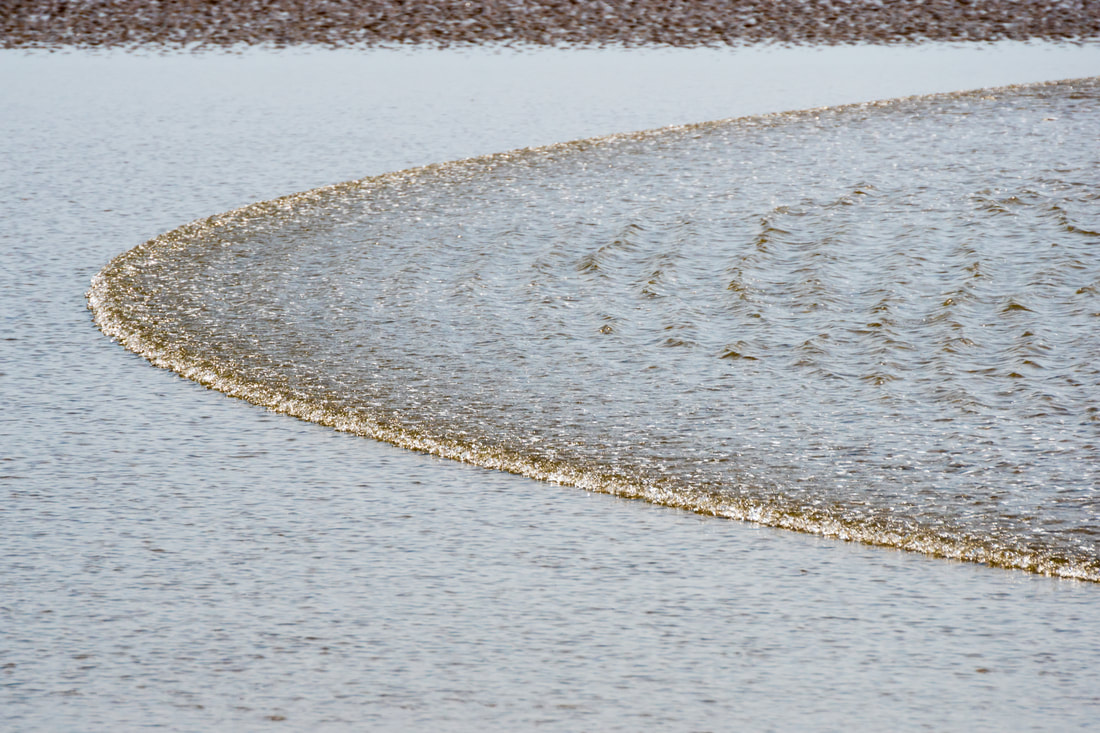 The Bore coming up the channel in June 2020.
​Hazards

Spring Tides happen within a couple of days after a new or a full moon.  At Grange, every daytime Spring Tide High Water is in the early afternoon.  Bay walks are made during daylight hours and when the Bay is clear of tidal water.  This is at Neap Tide, with High Water at about 07:00 hours, and then at about 1900 hours.  Then, in the morning, the walkers can start walking onto the Bay behind an ebbing Neap Tide.

Almost all walks take place fortnightly on weekends closest to a Neap Tide.  They do not take place on weekends close to Spring Tides, because the Bay is then full of water in the middle of the day.
Walks weekends can be predicted by checking the phases of the moon.  Unless it is mid-summer with very long daylight hours, walks do not happen on weekends close to either a full moon or a new moon.
Grange-over-Sands, pictures of Grange-over-Sands, photographs of grange-over-sands, photos, Bodian, photography, photographs, pictures, old maps, historic maps, Cumbria, South Lakeland, images, pictures, photos, Nick Thorne, Lake district, lake, district, Hampsfell, Morecambe Bay, Grange, Grange over Sands, Grange, over, Sands, maps, history, historic maps, councils