Grange is first mentioned in the ancient Cartmel Priory Registers in the 15th or 16th century when it was recorded as 'Grange-with-Kentisbank'.  It is generally believed that the name derived from the old French 'Graunge' meaning 'a barn' or ‘granary’ where the monks of Cartmel Priory stored some of their grain (or possibly from the Latin 'Grancia' - meaning Grain).  They may have also had a small harbour here.

The village grew slowly as a small fishing village, and during the eighteenth century it had occasional shipping.  Ships heading up the estuary couldn't carry full loads because of the shallowness of the water - so would offload cargo at Grange, where it was stored ina  small warehouse for later collection and a second run up the river.  A 'Tide Waiter' was appointed to make sure the cargo was okay (basically a customs officer).  This probably led to a couple of inns (The Commodore).


There was small tourism - with visitors coming by boat to the small piers at Clare House Lane and Bailey Lane.  The one at Clare House Lane was complete with a toll house.  The Frances Frith collection has many old photos of the area, including the piers in 1896.


As a town, it only really begun to develop in the Victorian era with the completion of the Ulverston(e) and Lancaster Railway in 1857.  This enabled the town to become a popular seaside resort, and was really the start of the modern history of Grange-over-Sands as we know it.  Hotels, such as the Grange Hotel, and health related hydropathic establishments were built.  Piers were also built at the bottom of Bailey Lane and Clare House Lane to take steamers from Morecambe and Blackpool.

Wealthy factory owners from Lancashire and Yorkshire could reach Grange in a couple of hours, and so began to build holiday houses and apartments.

Until the coming of the railway, the main communication route was the roads across the sands from Kents Bank to Arnside and Hest Bank.  The first decent road in the area was not built until 1820, when the new turnpike was completed between Levens bridge to Greenodd.  But even then, it was a long way round Morecambe Bay, so the cross sands route remained in use right up until the railway took over.

The promenade was built in 1902-1904, and is over a mile long, and traffic free – being between the railway and the sands.  The sands have, over the last 20-30 years become silted up and grassed over as the River Kent, which used to flow past the promenade has migrated south, away from the town.  In 2007, following sustained easterly winds, the river begun to switch it’s course back across the bay, and is now closer to Grange than it has been for some time.  Whether it continues to move across the bay to reach the promenade again, only time will tell.  (In early 2013 the main channel moved further out into the bay, by about 30 yards or so; in June 2014 it moved over towards Arnside and back again in just a few days.) 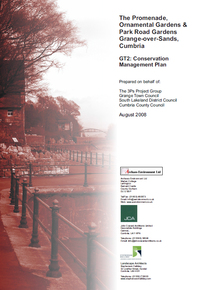 This Conservation Management Plan was drawn up in 2008 as part of the Time & Tide project.  It contains a wealth of useful information, and between pages 40-65 an excellent summary of the history of Grange-over-Sands.  Well worth a read.

Mainly collated from “A History of the County of Lancaster: Volume 8”, William Farrer & J. Brownbill (editors), as well as some other sources.

Grange historically lay within the township of Broughton, in the parish of Cartmel, within the Lonsdale Hundred (North of the Sands), in the County Palatine of Lancaster (Lancashire).

The earliest record of Cartmel by name occurs in 677, when the Northumbrian king Egfrid, having just conquered the district, granted to St. Cuthbert the whole of the lands called Cartmel with all the Britons therein.  What result the gift had is unknown, but it probably led to the foundation of a church there or the rebuilding of an old one, for at the Norman Conquest the southern part of Cartmel was known as Kirkby.  In 1066 this Kirkby, as 6 ploughlands, was held by Duuan, with the remainder of the parish being Walton on the north-west and Newton.  When the Domesday Survey was made the whole of the extensive region of Lonsdale both north and south of the sands was included in the West Riding of Yorkshire

The Six Hundreds of Lancashire are believed to originate from before the Domesday Book, with the county of Lancashire being established some time after the Norman conquest when William the Conqueror gave the land between the Ribble and the Mersey, together with Amounderness, to Roger de Poitou.  In the early 1090s Lonsdale, Cartmel and Furness were added to his estates to facilitate the defence of the area south of Morecambe Bay from Scottish raiding parties, which travelled round the Cumberland coast and across the bay at low water, rather than through the mountainous regions of the Lake District.  Because of the geography of the area, the Lonsdale Hundred really formed two areas known as Lonsdale South of the Sands, and Lonsdale North of the Sands, the latter being three main areas – Low Furness, High Furness and Cartmel.  The river Kent at its confluence with the waters of the Bay of Morecambe separated the two Lonsdales. The sands and waters of the bay formed the southern boundary of Lonsdale North of the Sands and the western boundary of Lonsdale South of the Sands.  Lonsdale North of the Sands was made up of the parishes of Aldingham, Cartmel, Coulton (sic), Dalton, Hawkshead, Kirkby Ireleth, Pennington, Ulverstone (sic), and Urswick – which each contained townships (44 altogether).  The name Lonsdale refers to the River Lune which flowed through the southern part of the hundred.

Cartmel Parish contained seven townships – Staveley, Upper Holker, Lower Holker,Upper Allithwaite, Lower Allithwaite, Broughton East, and Cartmel Fell.  The Map of the Parish of Cartmel shows the townships. The The County boundary is marked in yellow, the Parish boundaries and names are marked in red while the boundaries between the individual townships along with their names are marked in blue.  One result of the comparative unity of the parish was that allotments of the common lands were made to one township within the boundaries of the others.  There were some small detached parts of Lower Holker, Lower and Upper Allithwaite and Staveley lying within Broughton East (not shown on this map). 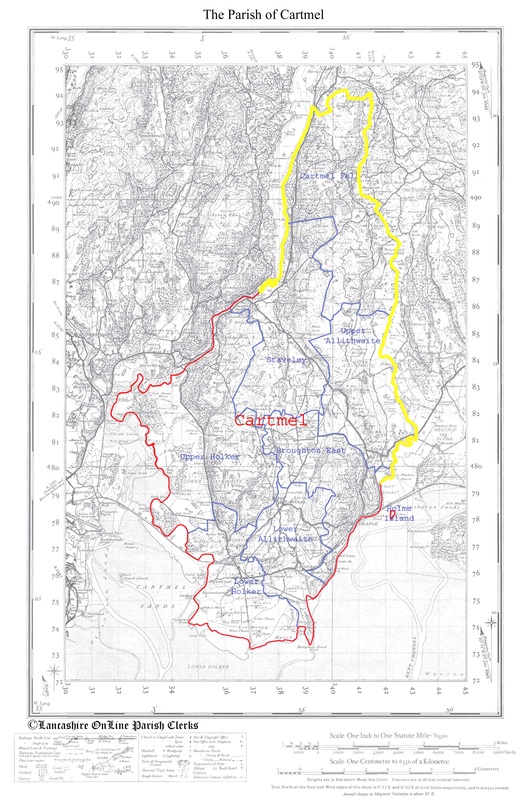 After the Conquest Cartmel remained in the king's hands till about 1186, when Henry II granted it to William Marshal Earl of Pembroke, who about 1189 gave the whole territory of Cartmel to canons regular to maintain divine worship in the church.  The three divisions of the parish found in The Domesday Book—Kirkby, Walton and Newton—appear under fresh names in 1332 and 1624, namely Allithwaite, Holker and Broughton.

Till the Reformation the history of the parish is that of the priory.  The priory was suppressed in 1536, and following a rebellion the lordship of Cartmel was then annexed to the duchy of Lancaster, and the site of the priory and its lands were in course of time granted out. The rectory was by Philip and Mary appropriated to the new bishopric of Chester.  'Grange-with-Kentisbank' can be found named in the Cartmel Priory Registers of 1536.

In the nineteenth century the area fell under the auspices of the Ulverston Rural Sanitary Authority.  But in 1867 Grange declared that it intended to apply for the Local Government Act because the 'want of proper sewage is becoming a serious probelm owing to the growth of the place'.  In 1874 the Grange Local Board of Health (LBD) was formed with powers relating to sewers, water supplies, and cleaning and paving streets.  Their Sanitary District roughly (although not entirely) followed the modern boundary of the parish of Grange, and the inaugral meeting took place above the Crown Hotel on 29 October 1874.  The 1894 Local Government Act renamed Urban Sanitary Authorities and Boards of Health as Urban District Councils, and a new civil parish of Grange was formally created from parts of Broughton East (mostly), Upper and Lower Allithwaite township (now civil parishes). The area was administered by Grange Urban District Council and covered 1540 acres [623 ha], and a further 274 acres [111 ha] was transferred from Lower Allithwaite to Grange in 1914.

The 'over-Sands' suffix was added in around 1858 by Reverend Wilson Rigg, the first vicar of St Pauls (see 'Road Across the Sands') who was fed up with his post going to Grange in Borrowdale.

In 1974, the local government re-organisation saw the disbanding of the urban and rural district councils within Lonsdale – and the whole area is now within South Lakeland District Council’s administration – although Grange Town Council, like other local councils are gradually taking on greater responsibility for services in the area.  The whole of Lancashire / Lonsdale north of the sands was transferred to the new county of Cumbria.